Ok a few months back a friend of mine recommended me this mixtape and I have to say it is one of best I've heard, Diz is from L.A. and works with his producer Moonshine and if you give the mixtape a try you'll see he's a great talent too with some great instrumentals.

Here's a link where you can get the mixtape http://diznmoon.com/ and I'd say its well worth the $5, you can stream all the songs anyway so if you just want to have a listen I would recommend it! Stand out tracks are Once Again, City Lights, Impossible, New Religion, Capital D but give them all a listen you won't be dissapointed. 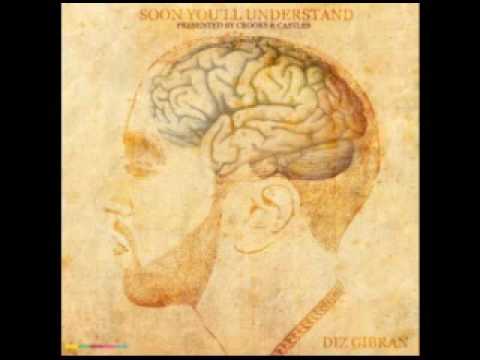 XXLmag.com Review: "Until a few days ago I’ve never in my life heard of Diz Gibran. My man back in the day named himself the 🤬 Diz (son was a 5 Percenter) but I’m pretty sure this isn’t the same man. Matter of fact, I’m damn sure. This Diz is straight out of LA, but I’ll be damned if he doesn’t have a early ’90s NYC style and music. Blame it on his producer, Moonshine who’s sound is reminiscent of a young and hungry DJ Premier. This mixtape’s been sitting on my lap for a hot second, but when I threw it in it turned out to be one of the best decisions I made in weeks. Diz is that nucca!

Don’t be fooled by son’s young sounding voice, dude’s lyrical game is as crazy as Amy Winehouse on one of her drug binges. His apologetic “The Hardest Word” got him asking for forgiveness to the peoples he let down in his life while on “Just Me” he went in lyrically saying, “Ain’t nothing wrong with wanting the best things/we play the game right, you can call us the Chess kings/I watch people with less means make it work/come from last place to win the race and take the perks/so since my date of birth it’s been her for me to grab/that’s why I give it all that I have/for the future, yesterday is all in the past.” And that’s barely the tip of the iceberg of what this kid is jotting down on his pad. His pad is riddled with blood, sweat and tears. His notebook is like a 🤬 ’s Kotex or something.

Not to mention the help he got behind the boards. The samples that his producer, Moonshine used to craft these soulful melodic and hypnotic productions that’ll f*ck with your conscious and touch your emotions were damn near biblical. Joints like “Impossible” where a guitar string is constantly plucked and the drums on “Once Again” made me wanna put these sounds on a spoon, throw a lighter under it and just stick it in my veins!! And the way those horns were arranged on “Exactly” was just mouth watering. Let the Moon shine cause homie is next!

The best way I can describe this mixtape is to say that if cavemen had this in the B.C. ages, they wouldn’t need to smash to rocks together to get fire. Just rub this joint against wood and voila. Diz didn’t waste one bar or one rhyme on mediocrity. I’m a Brooklyn nucca to the heart, but it really seems like the West Coast MCs are really bringing back that true to life hip-hop sound. And when I say true to life I mean capturing the essence and raw emotion of inner city men and women. Diz and Moonshine took it to the next level and just brought poetry in a 🤬 pipe. And all I can really say at the end of the day is that Diz is what it is.-The Infamous"

Hes's also worked with J Dilla and here's the song, it's not the best quality but definately worth checking:

Was searching for more material but there isn't much out there but I did find another of his mixtapes made back in 2005, Spin City Vol. 1, a good effort aswell to be fair he said this on it:
"Ok so since I have the wheel for the day it’s only right that I get a little shameless promotion in…haha. This is the first mixtape that I did way back in ‘05 called “Spin City Vol. 1?. Yeah I know, Vol. 1 is usually followed by a Vol. 2 and so on but you know how 🤬 is, I lost focus and momentum. Anyway I did this when I was living in Miami, shouts to my right hand Blanco. It’s about 50/50 original material and mixtape instrumentals but 100% dope. If you like the stuff you’ve been hearing from me lately, get a glimpse of what started it all."

Not sure what he is doing at the moment but I think he's working on a project so will post any info when I find out, or if anyone else is into him they could say?
0 · Share on TwitterShare on Facebook