Proof, if proof be need be that Doctor Who has well and truly cracked America was delivered with roaring, rousing cheers in Hall H at the San Diego Comic-Con on Sunday morning as the panel for the show saw a packed house celebrate the stars and get treated to a brand new trailer for the remainder of this year’s episodes.

But if you weren’t at Comic-Con this year (and, given the size of the queue for the hall and the fact that Glee and supernatural were also on display in the venue leading to the cavernous space filling up quickly, you may not have gotten in even if you were), help is at hand via the Magical Internets.

Yup, the trailer is online and can be watched below. 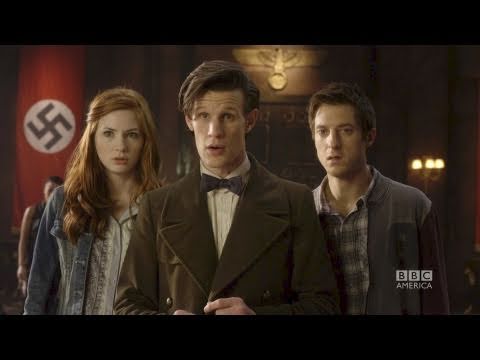 It really is a tease for the next set of adventures, featuring what looks like a rogue’s gallery of foes both old and new, lots of running (naturally), the Doctor (Matt Smith) looking concerned that he may actually cark it this time, River Song (Alex Kingston) with an enigmatic eye patch and, since the first episode of the autumn split season really is called Let’s 🤬 🤬 , the man himself.

It looks like we’ll be in for another wild ride from Steven Moffat and the gang. The episode, according to BBC America, arrives on August 27. While the Beeb’s site didn’t have a date at time of writing, we figure it’ll be the same day or, just to mess with US fans, a week earlier…