The wealth gap between whites and each of the nation's two largest minorities—Hispanics and blacks—has widened to unprecedented levels amid the housing crisis and the recession, according to new research. 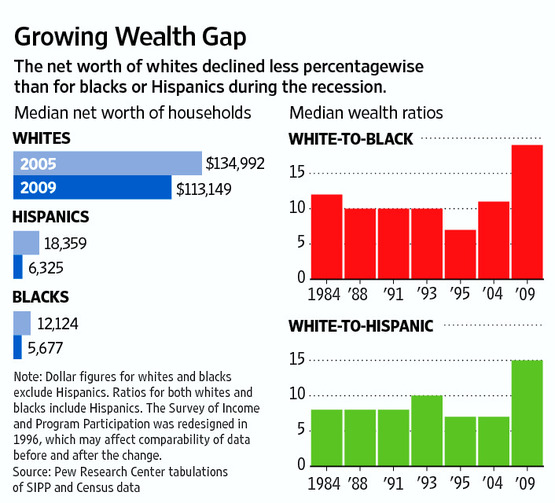 The disparities are the greatest since the government began tracking such data a quarter-century ago, with the gulf separating whites from other groups twice as wide as it was in the two decades prior to the recession and 2008 financial crisis, according to the study.

"In the four years between 2005 and 2009, there was a sudden and steep increase in wealth disparities," said Rakesh Kochhar, a senior Pew researcher and co-author of the report. He said that "using average, as opposed to median, net worth would not paint as accurate a picture because it would give greater weight to wealthier households."

The gloomy picture was precipitated by the housing bubble's collapse in 2006 and the recession from late 2007 to mid-2009, which took a "far greater toll" on the wealth of minorities than whites, according to the report.

From 2005 to 2009, inflation-adjusted median wealth plunged two-thirds among Hispanic households and 53% among black households, compared with just 16% for white households.

Wealth—the sum of such assets as a home, cars, stocks, bank and retirement accounts, minus the sum of debt—is a key indicator of economic well being, alongside income. Income refers to wages, interest, profits and other sources of earnings. The main difference between wealth and income is that wealth can be passed on.

"Wealth can establish the financial status of a family for generations," said Mr. Kochhar, who is an economist.

Late last year, the U.S. Census Bureau reported that the number of Americans living in poverty was at a 15-year high.

For all groups, home ownership is the biggest contributor to net worth. The surge in home prices early in the past decade was accompanied by a historic increase in home-ownership rate, to 69% in 2009 from 64% in 2004. But plummeting house values then became the biggest cause of the erosion in household wealth, the study found.

The price drop had a more detrimental impact on minorities than on whites: Hispanics and blacks derive more than half of their net worth from home equity, whereas it accounts for 44% of a white household's net worth.

The two-bedroom house of Laevonne Gordon, an African-American from Escondido, Calif., was worth $265,000 when she bought it in 2005. Now, it is valued at $81,000, and she is behind on her monthly mortgage payments. "I'm trying to get a loan modification so I can keep the house," she said during a visit to Community Housing Works, a counseling agency in San Diego.

Hispanics were hardest hit by the housing meltdown because they are concentrated in areas that suffered the biggest depreciation in home values—Arizona, California, Florida and Nevada.

Given that a bigger share of whites own stocks and mutual funds, and have retirement accounts, the stock-market rebound since 2009 is likely to have benefited white households more than minority households.

Ms. Gordon, a mother of three in the process of getting a divorce, has been delivering newspapers since her home day-care-center business went downhill because many of her clients lost their jobs and their homes.

The findings are based on Pew's analysis of data from the Survey of Income and Program Participation, an economic questionnaire distributed to more than 36,000 households by the U.S. Census Bureau in late 2009.
0 · Share on Facebook