If you knew it was happening at all, your expectations for the ninth instalment in the original Hellraiser franchise may have been somewhat low. Prepare to drop them further, if you dare to take a look at the trailer for Hellraiser: Revelations. 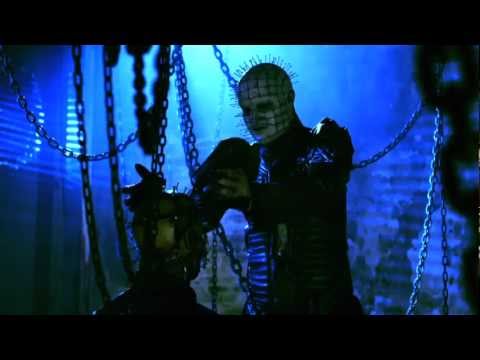 To recap, this is a stopgap release from Dimension, to prevent their rights lapsing before Patrick Lussier can get going on his reboot, which ought to be a bigger deal. Revelations was knocked together in record time on a tiny budget (estimated at under a million bucks), circumstances it's apparently attempted to get around by going the found-footage route to some extent. Sadly, on this evidence, it still plays like a fan film, an impression not helped by Stefan Smith Collins' karaoke Pinhead. Doug Bradley, probably wisely, wasn't interested.

Nick Eversman (Vampires Suck) and Jay Gillespie (2001 Maniacs) star as Steve and Nico, backpackers in Mexico looking for dodgy new experiences and, natch, stumbling across the famous Hellraiser puzzlebox. Victor Garcia (Mirrors 2, Return to House on Haunted Hill) is the director, and the screenplay is by FX make-up guru Gary Tunnicliffe.

Original Hellraiser author and director Clive Barker took to the Twitter-sphere over the weekend to blast the production: "I want to put on record that the flick out there using the word Hellraiser is no 🤬 ' child of mine! I have nothing to do with the 🤬 ' thing. If they claim it's 'from the mind of Clive Barker', it's a lie. It's not even from my 🤬 ."

Given a very brief theatrical run in the US as part of a double bill with the equally wretched Children of the Corn: Genesis, Hellraiser: Revelations will to all intents and purposes go straight to DVD there in time for Hallowe'en. The last three Hellraisers (Hellseeker, Deader and Hellworld) still haven't been released in the UK at all (although R2 DVDs are available from Europe), so we may never see it here. Tragic loss? Discuss below.