The rock and cena to team up at survivor series 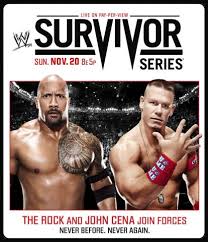 the rock will be at survivor series on Nov 20th...but the question is in what role...it looks like he and cena will team up. The only way I see this going down is if they team up with 3 other faces and go against a newly formed version of NWO with nash or a Triple H turned heel with nash.