waterproof Conqueror of SelfOn The Road to ZionMembers Posts: 9,412 ✭✭✭✭✭
March 2012 edited March 2012 in R & R (Religion and Race)
First Shabbat SHALOM, and i have no love for ALL INVADERS OF AFRIKA!!!!!!!!!!! and there will be a rise of HAM AND SHEM ANCESTORS and will take back their homeland. AND I PRAY FOR THE DAY THAT HAM AND SHEM ANCESTORS WILL KICK OUT THE INVADERS AND TAKE BACK OUR HOME, this 🤬 makes me sick to my stomach

A shocking video has appeared on the Internet showing Libyan rebels torturing a group of black Africans. People with their hands bound are shown being locked in a zoo-like cage and allegedly forced to eat the old Libyan flag.

­“Eat the flag, you dog. Patience you dog, patience. 🤬 is Great,” screams a voice off-camera in the video uploaded to YouTube last week, which also made its way onto LiveLeak.com.

The torturers are also shown making the group of captive black Africans stand up with pieces of green cloth still in their mouths and apparently forcing them start jumping.


A number of people are shown standing outside the cage watching the atrocity.


After Muammar Gaddafi was killed, hundreds of migrant workers from neighboring states were imprisoned by fighters allied to the new interim authorities.


They accuse the black Africans of having been mercenaries for the late ruler.


“At the beginning of the crisis, there was vastly exaggerated propaganda for which the highest level of the National Transitional Council should take some responsibility because they largely contributed to that unfounded propaganda,” said Donatella Rovera, Amnesty’s senior crisis response advisor.


Some of the black migrants managed to flee into neighboring Mali and Niger, but more than 5,000 were detained. They face mass execution, beatings, and revenge killings, according to an Al Jazeera report published back in September.


Before the Libyan uprising broke out, the country hosted about a million black African workers, many of them employed in domestic work, construction, trash collection and other low-wage jobs.

Human Rights Investigations (HRI) suspect Libyan rebels of ethnic cleansing of the black population of the country, particularly in the city of Tawergha. 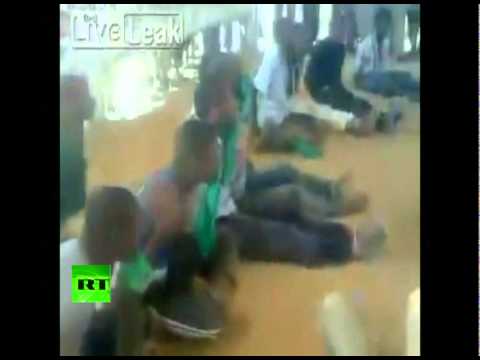