Expletives have been flying from my mouth with regularity over the past couple of days. Whether it's falling into the black abyss that used to be a wall or figuring out how to point three lights to create a walkway, the mind-bending, light-altering puzzles of Closure have been testing my gaming mettle. But I'm not mad. Sure, I'm getting my ass kicked, but I'm engaged, entertained, intrigued -- and I'm going to keep coming back for more.

If that isn't the sign of a well-put together puzzle game, then I don't know what is.

Closure comes packing an impressive indie scene resume. The three-man team at developer Eyebrow Interactive won an excellence award in audio, the 2012 Indie Game Challenge Grand Prize, and even an Indiecade Gameplay Innovation Award. But most accolades resulted from when Closure first came to browsers in 2009 , and ever since then, the developer has toiled away at rebuilding its game from the ground up for the PlayStation Network. It takes only five seconds of playing the Flash version to see that they weren't kidding around. 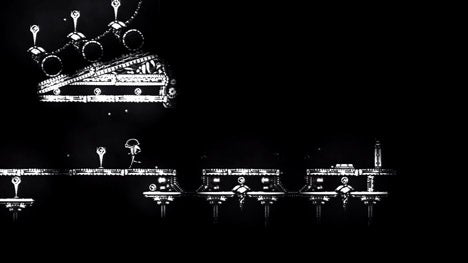 Artsy to its core, Closure's puzzle-solving antics revolve around darkness and illumination and how those forces can be intermingled and manipulated. Indeed, the game's beautiful graphical motif gives this away from the get-go. Its stylish black and white graphics are most reminiscent of the likes of Limbo, though comparisons to Playdead's tour de force are admittedly unfair considering Closure was out on browsers a year and a half before Limbo crashed onto Xbox Live.

Most importantly, though, Closure's stunning aesthetics add a great deal to the game's overtly somber feel. Likewise, the music provides perfect accompaniment that furthers the adventure's sad, almost desperate arc. I was never quite sure what Eyebrow Interactive was trying to tell me as I played Closure -- and perhaps I never will be -- but the game's look and sound let me know that they were trying to tell me something. And that something is decidedly unhappy. It's this emotional unknown, tied together with satisfying gameplay that makes Closure so damn engaging.

I'm not a talented puzzle gamer by any stretch of the imagination -- my nightmares regarding the NES Adventures of Lolo trilogy are well-documented on Podcast Beyond -- but I still enjoy the genre. As I jumped into the beginning of Closure, I was greeted immediately by a thoughtful, almost ingenious tutorial that told me everything I needed to know without ever actually telling me anything. In other words, the game's not only accessible, but it never holds your hand and babies you, either.

From there, I was thrust into the first world of Closure (the game has three worlds, each with 24 puzzles to solve). Working through each puzzle requires a different take on the essence of bending light into dark. Often, your amorphous character will carry a light orb with him that sets aglow the immediate area around him. Other times, stationary spotlights must be moved into certain positions. Some bulbs even shine light only to remove it as you draw near. As Eyebrow Interactive piles more and more on for the gamer to study and understand, puzzles get more complicated in turn. But the studio has dealt with the ramp-up in difficulty quite eloquently, especially for what is, in essence, a 🤬 puzzle game.

But just how does the light affect the darkness, and how does this affect your ability to solve each puzzle? In premise, whatever light doesn't touch during each puzzle turns into black nothingness, regardless of what's actually there in reality. That means that, if lit in certain ways, barriers can become platforms and pillars standing in your way can turn into voids. It's not so much that actual reality is important in Closure so much as what your visual reality is at any given time. 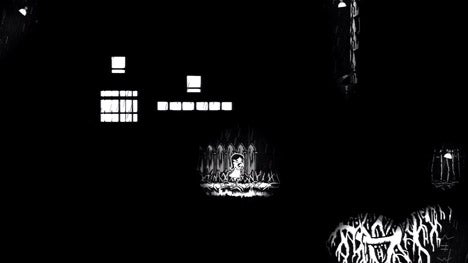 Such gameplay proves to be brilliant in its execution. Puzzles do indeed bend the mind after a while, but I never found myself so frustrated that I wanted to stop. Instead, I kept on plugging along, slowly forming solutions in my mind as I inched closer and closer to resolution. And because Closure never, ever makes you rush, nor does it busy itself with points or timers, you can take the experience as it comes. It doesn't matter if you solve a puzzle in 10 seconds or 10 minutes; the game will proceed the same way no matter what and will never remind you of how poorly you may (or may not) be playing. Instead, it forgives and lets you go at it as many times as you want. Now that's my kind of puzzle game.

Ever since being announced for PlayStation Network last year, Closure has looked intriguing, but I had no idea just how good it actually was. Now I do. Stylish and engaging, Closure’s thoughtful and pensive approach to the puzzle genre should be applauded. It controls smoothly and looks and sounds great as it both punishes and rewards. It strikes just the right balance that all puzzle games should strive for; something that even untalented puzzle gamers shouldn’t feel frustrated with while engendering a more 🤬 , gifted puzzle audience with its own unique set of challenges.

But what really stands out to me is that I want to see more of Closure. I’ve gone through over 50 of the game’s 72 puzzles, and even though the review is behind me, the game certainly isn’t. I’ll be back for more, and once you jump in, I suspect you will be too.

Presentation 9.0
Few games evoke emotion and feeling without a word being uttered. Closure’s deep approach is much appreciated and greatly successful.

Graphics 8.0
Compare it to Limbo if you’d like, but Closure was out on browsers 18 months before Limbo stormed XBLA. Food for thought.

Sound 8.5
Closure’s sonic accompaniment demands attention, as it adds so much to the somber experience

Gameplay 8.5
Closure works wonderfully, and your character can be controlled with either the directional pad or analog stick, which is a nice – and surprisingly rare – touch.

Lasting Appeal 8.0
Closure was tough for me; it could be easier for other gamers. Either way, 72 puzzles to solve and collectibles to find will keep you busy for a while.