Warner Bros. screened footage from The Dark Knight Rises today at CinemaCon in Las Vegas, but they did NOT show the new trailer set to debut with next week's release of Marvel's The Avengers. Some spoilers ahead! 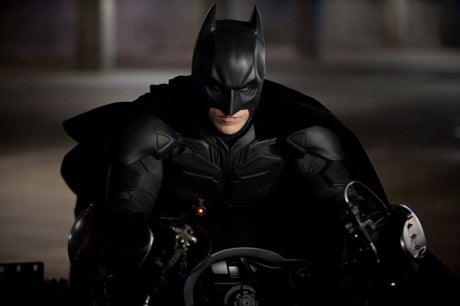 Warners president Jeff Robinov introduced Christopher Nolan to present an extended montage of moody footage from his swan song to the Batman franchise that he rebooted back in 2005 with Batman Begins. First, it was plainly evident that Bane's audio had been boosted. Unlike in the prologue attached to last winter's release of Mission: Impossible - Ghost Protocol, some of the footage of which made its way into this several minutes-long sizzle reel, Bane was not muffled at all now. Indeed, I feel confident saying he was crystal clear now! So we can finally lay those "mumbling" memes to rest.

A new, atmospheric Bat-score was used here, music that slowly built in tension and eeriness the way Joker's theme did in The Dark Knight. There was plenty of images of Batman and Catwoman in action here, lots of Batpod stuff, brawling and explosions. The overriding takeaway from this footage was that the very existence of Gotham City itself is at stake, with a stunning bridge destruction set-piece, more of the football stadium chaos, and the fighting in the streets between Bane's merc army and the Gotham City Police Department (including shots of Commissioner Gordon, Joseph Gordon-Levitt's John Blake, and and Matthew Modine's politically-ambitious cop in action). We also see Bane and his men attacking the Gotham Stock Exchange. The rich and powerful of Gotham sure are in for it this summer. 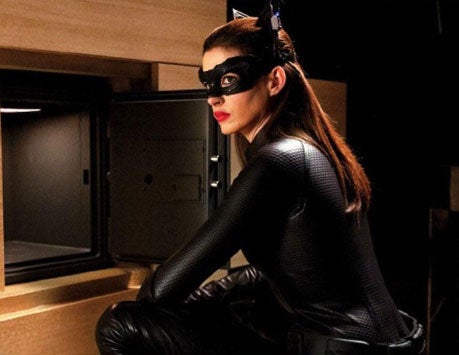 We see lots of Anne Hathaway's Selina Kyle here. We see her posing as a maid leaving Wayne Manor at night, as well as Catwoman breaking into a hidden wall safe. We see her kicking gunmen in the streets, firing the Batpod's weapons, but most importantly a dialogue scene between her and Batman. Catwoman tells Batman, "You've given them everything!" Batman cryptically replies, "I haven't given them everything. Not yet." Oh, Gotham, will Batman pay the ultimate price for your sorry, corrupt ass?! That creeping sense of finality really is everywhere in the presentation of TDKR, from its "The Legend Ends" tagline to even Nolan himself stressing this as the conclusion of his trilogy and the final chapter of their story.

Other sweet stuff we spotted in the footage? Bruce working in his new Batcave, as well as a very "we were destined for this"/finding each other in the crowd showdown between Batman and Bane. It was like two mythic gunfighters meeting for the duel to decide who lives or dies. This town literally isn't big enough for the both of them. We also get some nice Alfred moments here, a very intriguing shot of a mystery man at that stronghold in India they began filming at last year, as well as a hot and heavy shot of Bruce and Selina kissing.

Overall, the Dark Knight Rises footage was stunning. Atmospheric, unsettling, nerdgasm-inducing and epic. This will be the Batman movie to end all Batman movies ... perhaps literally!
1 · Share on TwitterShare on Facebook
«1234567…39»