waterproof Conqueror of SelfOn The Road to ZionMembers Posts: 9,412 ✭✭✭✭✭
July 2012 edited July 2012 in Quite Comical
THAT'S RIGHT this thread is for the greatest of the greats, THE GREEN SCAR, THE MAN WHO CAN SUMMON MANY DIFFERENT HULK personalities that you can really never shut him down, the Monster who slapped down the whole marvel hero's in WORLD WAR HULK the MONSTER KNOWN as THE WORLD BREAKER aka THE INCREDIBLE HULK.

This thread for all the Hulk fans to drop anything on the Hulk so Hulk fans please add to the thread and keep updating it on HULK movies, cartoon series that's dropping on dvd or tv, comics anything hulk or you want to just talk HULK COMICS After probing, the entity Beyonder once claimed that the Hulk's potential strength had "no finite element inside." His durability, regeneration, and endurance also increase in proportion to his temper. Greg Pak described the Hulk shown during World War Hulk as having a level of physical power where "Hulk was stronger than any mortal—and most immortals—who ever walked the Earth." 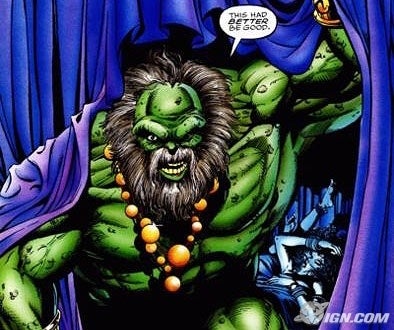