"Power cut hits millions, among world's worst outages." Could this happen in the U.S? 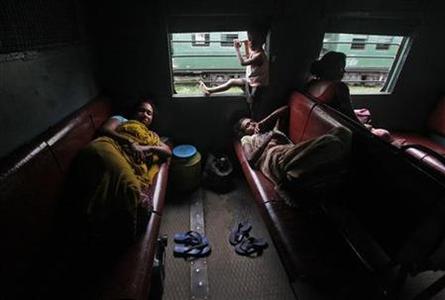 (Reuters) - Hundreds of millions of people across India were left without power on Tuesday in one of the world's worst blackouts, trapping miners, stranding train travellers and plunging hospitals into darkness when grids collapsed for the second time in two days.

Stretching from Assam to the Himalayas and the northwestern deserts of Rajasthan, the outage covered states where half of India's 1.2 billion people live and embarrassed the government, which has failed to build up enough power capacity to meet soaring demand.

"Even before we could figure out the reason for yesterday's failure, we had more grid failures today," said R.N. Nayak, chairman of the state-run Power Grid Corporation.

Prime Minister Manmohan Singh had vowed to fast-track stalled power and infrastructure projects as well as introduce free market reforms aimed at reviving India's flagging economy. But he has drawn fire for dragging his feet.

By nightfall, power was back up in the humid capital, New Delhi and much of the north, but a senior official said only a third was restored in the rural state of Uttar Pradesh, itself home to more people than Brazil.

The cuts in such a widespread area of the world's second most populous nation appeared to be one of the biggest in history, and hurt Indians' pride as the country seeks to emerge as a major force on the international stage.

"It's certainly shameful. Power is a very basic amenity and situations like these should not occur," said Unnayan Amitabh, 19, an intern with HSBC bank in New Delhi, before giving up on the underground train system and flagging down an auto-rickshaw to get home.

"They talk about big ticket reforms but can't get something as essential as power supply right."

Power Minister Sushilkumar Shinde blamed the system collapse on some states drawing more than their share of electricity from the over-burdened grid, but Uttar Pradesh's top civil servant for energy said outdated transmission lines were at fault.

Between a quarter and 40 percent of Indians are not connected to the national grid.

Two hundred miners were stranded in three deep coal shafts in the state of West Bengal when their electric elevators stopped working. Eastern Coalfields Limited official Niladri Roy said workers at the mines, one of which is 700 metres (3,000 feet) deep, were not in danger and were being taken out.

Train stations in Kolkata were swamped and traffic jammed the streets after government offices closed early in the dilapidated coastal city of 5 million people.

The power failed in some major city hospitals and office buildings had to fire up diesel generators.

By mid-evening, services had been restored on the New Delhi metro system.

On Monday, India was forced to buy extra power from the tiny neighbouring kingdom of Bhutan to help it recover from a blackout that hit more than 300 million people.

Indians took to social networking sites to ridicule the United Progressive Alliance (UPA) government, in part for promoting Shinde despite the power cuts.

Narendra Modi, an opposition leader and chief minister in Gujarat, a state that enjoys a surplus of power, was scornful.

"With poor economic management UPA has emptied the pockets of common man; kept stomachs hungry with inflation & today pushed them into darkness," he said on his Twitter account.

The problem has been made worse by a weak monsoon in agricultural states such as wheat-belt Punjab and Uttar Pradesh in the Ganges plain, which has a larger population than Brazil.

India's electricity distribution and transmission is mostly state run, with private companies operating in Delhi, Mumbai and Kolkata. Less than a quarter of generation is private nationwide.

More than half the country's electricity is generated by coal, with hydro power and nuclear also contributing.

Power shortages and a creaky road and rail network have weighed heavily on India's efforts to industrialize. Grappling with the slowest economic growth in nine years, the government recently scaled back a target to pump $1 trillion into infrastructure over the next five years.

Major industries have their own power plants or diesel generators and are shielded from outages. But the inconsistent supply hits investment and disrupts small businesses.

High consumption of heavily subsidized diesel by farmers and businesses has fuelled a gaping fiscal deficit that the government has vowed to tackle to restore confidence in the economy.

But the poor monsoon means a subsidy cut is politically difficult.

On Tuesday, the central bank cut its economic growth outlook for the fiscal year that ends in March to 6.5 percent, from the 7.3 percent assumption made in April, putting its outlook closer to that of many private economists.

"This is going to have a substantial adverse impact on the overall economic activity. Power failure for two consecutive days hits sentiment very badly," said N. Bhanumurthy, a senior economist at National Institute of Public Finance and Policy.