People line up to use an ATM machine outside of Laiki Bank branch in Larnaca, Cyprus, on Saturday. Many rushed to cooperative banks which are open Saturdays in Cyprus after learning that the terms of a bailout deal that the cash-strapped country hammered out with international lenders includes a one-time levy on bank deposits.

NICOSIA, Cyprus - Cyprus's parliament will decide on Monday whether savers must pay a levy on bank deposits under terms for an international bailout to avert bankruptcy - with approval far from certain.

The euro zone demand on Saturday that savers pay up to 10 percent of deposits as a condition for the 10 billion euro ($13 billion) bailout drew fury in the eastern Mediterranean island and caused some jitters elsewhere in the region.

Cypriots emptied ATMs after news emerged of bailout terms which broke a previous euro zone taboo on protecting depositors in its efforts to address the regional debt crisis.

Newly elected Cypriot President Nicos Anastasiades said refusing the bailout would have led to the collapse of the island's two largest banks, badly singed by their exposure to bailed out neighbour Greece.

The tax on deposits in Cyprus, which accounts for only 0.2 percent of the euro zone's economy, is expected to raise up to 6 billion euros as a condition for the bailout, mainly needed to recapitalize banks.

Those affected will include rich Russians with deposits in Cyprus and Europeans who have retired to the island as well as Cypriots themselves.

The size of foreign deposits in Cyprus - estimated at 37 percent of the total - was one reason the euro zone agreed to the tax on savings, to take effect when banks reopen on Tuesday. Cyprus stopped electronic transfers over the weekend.

Cyprus's parliament was due to convene on Sunday in an emergency session to discuss the proposed penalties on deposits: 9.9 percent for those exceeding 100,000 euros and 6.7 percent on anything below that. However, the Cyprus News Agency reported that the meetings had been postponed until Monday.

The choice facing Cyprus was between "the catastrophic scenario of disorderly bankruptcy or the scenario of a painful but controlled management of the crisis," President Anastasiades said in a written statement.

'A gun to our head'
His right-wing Democratic Rally party, with 20 seats in the 56-member parliament, needs support from other factions for a vote to pass.

"The dilemmas are very tough," said Marios Karoyian, head of the Democratic Party, junior partner in the coalition government. "Things are unbelievably hard."

He did not say which way his party would vote. It is already split over backing Anastasiades three weeks ago.

Cyprus's Communist party AKEL, accused of stalling on a bailout during its tenure in power until the end of February, was likely to vote against the measure. The socialist Edek party called EU demands "absurd".

"This is unacceptably unfair and we are against it," said Adonis Yiangou of the Greens Party, the smallest in parliament but with the potential ability to swing any vote. 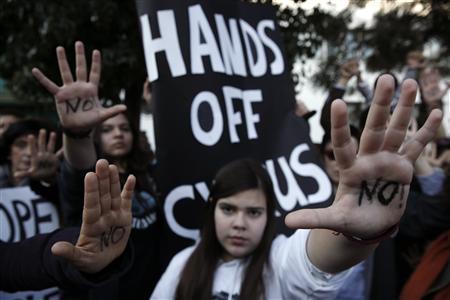 Protesters raise their open palms showing the word 'No' during an anti-bailout rally outside the parliament in Nicosia March 18, 2013. REUTERS-Yorgos Karahalis


By Michele Kambas and Karolina Tagaris

(Reuters) - Cypriot ministers scrambled to revise a plan to seize money from bank deposits before a parliamentary vote on Tuesday that will either secure the island's financial rescue or threaten its default.

The weekend announcement that Cyprus would impose a tax on bank accounts as part of a 10 billion euro ($13 billion) bailout by the European Union broke with previous practice that depositors' savings were sacrosanct. The euro and stock markets fell on concern the euro zone crisis was reigniting.

Before Tuesday's vote, which is too close to call and would send reverberations across the currency zone if lost, the government was working to soften the blow to smaller savers by tilting more of the tax towards those with deposits greater than 100,000 euros ($130,000).

The decision to target bank accounts stunned Cypriots, and police sealed off parliament in Nicosia as about 400 people staged a noisy protest outside, aggrieved that their small island of one million people should be singled out for such treatment.

Residents emptied cash machines over the weekend. The move also unnerved depositors in the euro zone's weaker economies and investors feared a precedent had been set that could reignite turmoil that the European Central Bank has calmed in recent months with its pledge to do whatever it takes to save the euro.

The government says Cyprus has no choice but to accept the bailout with the levy on deposits, or go bankrupt.

A Cypriot source told Reuters the introduction of a tax-free threshold for smaller bank deposits - maybe up to 20,000 euros - was under discussion but not yet agreed.

The parliamentary speaker said debate on the bank levy would be delayed until 12:00 p.m. EDT on Tuesday to buy more time to build consensus. Banks, shut on Monday for a bank holiday, will remain closed on Tuesday and Wednesday to avert any panic.

The euro zone has indicated that changes would be acceptable as long as the return of around six billion euros is maintained.

"It is up to the government alone to decide if it wants to change the structure," European Central Bank policymaker Joerg Asmussen, who was pivotal in the weekend negotiations, told reporters in Berlin.

"The important thing is that the financial contribution of 5.8 billion euros remains," he said.

Euro zone finance ministers will hold a teleconference at 1830 GMT on Monday.

"We are hugely disappointed by our so-called European partners. They have hurt the credibility of the banking system and the country's dignity," said Andreas Evangelou, 52, who said savings to put his son through university would be taken.

"They are treating us like guinea pigs," said Takis Georgiou, 49. "The government has lost its credibility in the eyes of the people. We'd be better off leaving the euro and returning to the pound, we don't want to end up like Greece."

Protesters had inked the word "No" on the palms of their hands. "Europe is for its people and not for Germany," one placard said.

On markets, the euro fell before recovering some losses. European stocks dropped two percent before recouping most of the lost ground - denoting only modest levels of concern - with banks taking the heaviest blow.

"The most important question is what would happen the following day if the bill isn't voted," Cyprus central bank governor Panicos Demetriades told parliament.

"What would certainly happen is that our two big banks would need to be consolidated. This doesn't mean that they would be completely destroyed. We will aim for this to happen in a completely orderly way."