Sam Hurd Gets 15 Years for Movin That White 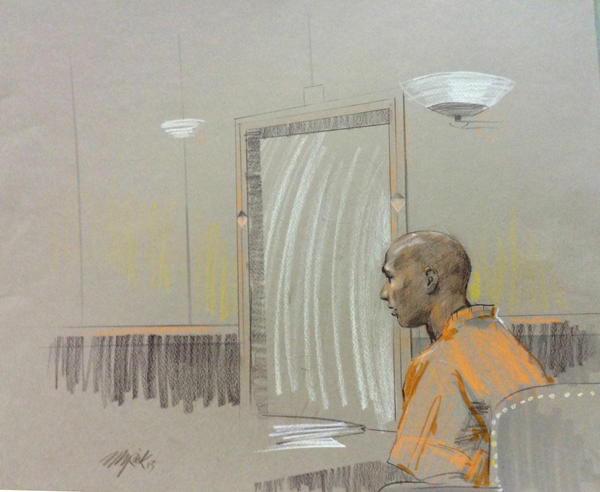 DALLAS — Former Bears player Sam Hurd, who rose from the rough and poor San Antonio streets to the glamor of the NFL, was sentenced Wednesday to 15 years in prison for his role in trying to set up a massive drug operation spanning three states.

U.S. District Judge Jorge Solis noted that Hurd's activity did not include many actual drug deals and was instead mostly “agreements.” Still, he described the scenario as “a tragedy” because Hurd — who had no criminal history — risked the success, accolades and family in his life.

“For some reason you chose to go another route and go down the drug trafficking route,” Solis told Hurd in a courtroom half-filled with Hurd’s family and friends. “You wanted to get into it in a big way. You didn’t just start nickel and diming it.”

When he heard the sentence, the former Northern Illinois player dropped his head and let out a sigh of relief and tears. Minutes earlier, he gave an emotional, if somewhat rambling, 30-minute plea apologizing for what he has done and describing in detail how he is trying to improve himself. He said he never has used or sold 🤬 .

“I have a lot of regrets,” said Hurd, his thin 6-foot-3 frame in an orange jump suit. “I regret not thinking about the consequences.”

Hurd, a popular player with teammates for his hard work and friendly personality, was arrested in December 2011 outside a Morton’s steakhouse near Chicago after accepting a kilogram of 🤬 from an undercover officer. It was inside a bag labeled, “Happy birthday.”

Inside the restaurant, prosecutors alleged, Hurd told the officer and an informant that he wanted to buy 5 to 10 kilograms of 🤬 and 1,000 pounds of marijuana weekly to distribute. He claimed he already was distributing 4 kilograms a week but wanted more.

Once outside, he was arrested within moments, capping months of investigation. The Bears subsequently released him in the middle of a three-year $5 million contract. Teammates, coaches and friends expressed shock at the arrest.

In court, Hurd’s lawyers recommended he be sentenced the minimum 10 years under federal law. Prosecutors did not formally request a time but they did not dispute a pre-sentence investigation report that initially resulted in a life sentence tabulation.

Hurd said he constantly smoked marijuana, calling himself “an addict.”

“Everything I’ve done in relation to this case is a direct result of my marijuana addiction and would get me and lead me to more marijuana,” he said.

He conceded that the $88,000 he provided to Toby Lujan, a co-defendant he considered “family,” probably was going toward drugs but that Lujan needed to pay off debts.

“I thought I was helping a friend,” he said.

And he admitted to buying and distributing marijuana. But Hurd and his lawyers argued that he was only partly involved in the drug enterprise prosecutors mapped out. They argued there is no evidence connecting him to his cousin, Jesse Tyrone Chavful, a co-defendant with a long criminal history. Chavful was sentenced to eight years in prison for his role.

“I asked to be sentenced to what I did, not what the government alleged that I did,” Hurd said.

Instead, Hurd’s lawyers said that text messages and phone calls between the two men was for printing T-shirts, which was Chavful’s business. Mike McCrum, Hurd’s attorney, provided a statement from Shatone Powers, a college teammate of Hurd’s at Northern Illinois who outlined business plans for the shirts. McCrum cited text messages and phone calls traced to Chavful that showed his partners were not Hurd but associates in Austin, Texas. One of the men Chavful regularly dealt with was the father of — perhaps coincidentally —Lions cornerback Chris Houston, McCrum said.

At the Chicago-area steakhouse, McCrum described the scene between Hurd and the undercover officers as one where Hurd — who two friends testified had a knack for exaggerating — boasted about clients and connections in the drug world he didn’t have.

“I do not have the IQ of a drug dealer,” Hurd told the judge later. McCrum, the attorney, described him as “a guy showing up at a restaurant, talking stupid.”

His guilty plea came after talks between the two sides broke down. The government later filed a revised indictment, charging him with one federal drug count instead of six.

Hurd has been in federal custody since the summer of 2012, when he was arrested in San Antonio after testing positive for marijuana while out on bond. It was during this time that prosecutors accused him of trying to buy drugs with Chavful.

Prosecutors argued that while Hurd may have been a good teammate and charitable with community work, he was developing another side as a drug kingpin who friends and family members didn’t know about.

The nearly four-hour hearing became like a mini-trial as Hurd’s lawyers called three witnesses, including his sister and a childhood friend who was the best man at his wedding.

McCrum said afterward he respected Solis’ decision to sentence Hurd for less than life, as was initially proposed by the pre-sentence investigative report.

“Those arguments by the government were crazy,” the defense attorney contended. “They weren’t supported by the evidence.”

Lujan’s sentencing is scheduled for January.