Darth Sidious ..in the grim darkness of the far future, there is only warMembers Posts: 2,507 ✭✭✭✭✭
May 2014 in For The Grown & Sexy
http://gma.yahoo.com/blogs/abc-blogs/utah-high-school-alters-yearbook-photos-show-less-162608563--abc-news-parenting.html?vp=1

The superintendent of the Utah school district where female students' yearbook photos were edited to show less skin says he is only sorry that the school district did not edit students' photos on a more consistent basis.

"We only apologize in the sense that we want to be more consistent with what we`re trying to do in that sense we can help kids better prepare for their future by knowing how to dress appropriately for things," Terry E. Shoemaker, superintendent of schools for the Wasatch County School District, told TV station KSTU in Salt Lake City.

Shoemaker was forced to respond after a handful of female students at Wasatch High School in Heber City, Utah, complained that their yearbook photos showed them in sleeved shirts, when they were originally wearing sleeveless apparel, or had their neckline covered, when they wore a lower-cut shirt to the yearbook photo-shoot in the fall.

"I started flipping through and then I noticed that mine was edited, that my shirt was pulled up further," Wasatch High sophomore Shelby Baum told KSTU.

"They didn't tell you before they did it," Baum said. "They didn't give you an option to fix it, so you look funny in your yearbook picture." 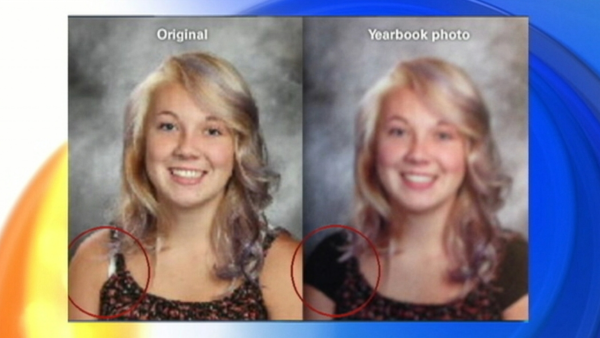 Shoemaker, who could not be reached today by ABC News, said there was a sign where students had their photos taken indicating that their photos could be edited if they violated the school dress code.

"It was a large enough sign that other people clearly remember it, and certainly it should have gotten their attention that that was a possibility," Shoemaker told KSTU.

The school district says on its website that a 4-foot-by-5-foot sign was placed in a location where students could see it before their photos were taken in the fall. The sign, according to the district, read, "tank tops, low cut tops, inappropriate slogans on shirts, etc. would not be allowed."

Shoemaker's apology for inconsistent application of the policy came after some of the females who were edited pointed out examples in which students' photos were left untouched while other students in near-similar attire were edited.

In one example, two different girls were wearing a similar sleeveless black shirt underneath a sleeveless denim vest. In one photo, sleeves were added to the black shirt and, in the other photo, the sleeveless shirt was left untouched.

"I feel like they put names in a hat and pick and choose who," Wasatch High sophomore Rachel Russel told KSTU. "There were plenty of girls that were wearing thicker tank tops and half of them got edited and half of them didn't."