PGR might be dead, but it certainly isn't forgotten
Published on Sep 11, 2014

Forza Horizon 2 is the next-gen racing game we’ve been waiting for.

There’s something super satisfying about taking to the open road with one finger on the brake and one on the gas.

Drifting around corners in beautiful cars, weaving through traffic without a care in the world, and tearing through fields and vineyards as we please. There’s no set destination, it’s all about the journey, an adventure to see where the road might lead.

Forza Horizon always felt like a spiritual sequel to Project Gotham Racing, but Horizon 2 feels like a step beyond that. It’s the sequel we’ve been waiting seven years for.

It actively encourages you to get creative with your racing. Horizon 2 wants you to cause chaos by heading off the track whenever you choose to. It wants you to burn rubber and flex your racing skills at every opportunity. Everything you do in Horizon 2 brings a skill counter into play; it tracks your various feats of awesome, and combos them together for massive rewards.

These rewards come in the form of new perks that are unlocked during your time in Horizon 2. These perks can do everything from giving you discounts on new cars, to letting you fast travel as you please around Southern Europe. Your skill points are also tracked via leaderboards, letting your friends and rivals see how bold you’re getting in some of the world’s nicest and fastest cars.

It’s the natural evolution of the well-loved Kudos system from Project Gotham, only it now comes packaged inside one of the tightest racing games we’ve had the pleasure of playing so far this generation.

“Freedom is one of the fundamental principles that we always talk about. That word is written on the walls of our studio, literally on the walls of our studio, because it is just a part of our DNA,” says Fulton. “We want to give you a game that’s full of experiences, full of cars, full of content and say, knock yourself out. Do what you want, in the order that you want.”

With original developer Bizarre Creations but a distant memory, the chance of Project Gotham Racing 5 ever appearing is unlikely. But Forza Horizon 2 is the next best thing.

The beautiful 1080p open world, the super slick 30fps racing, and the tight racing mechanics have all come together to create something quite unlike anything else on the shelves.

Forza Horizon 2 has successfully merged the previously unrivalled fun of PGR with the insanely fine-tuned mechanics of Forza Motorsport. The game is due for release on Xbox One on 30 September 2014, and if our recent hands-on is anything to go by, it's going to offer the drive of a lifetime. 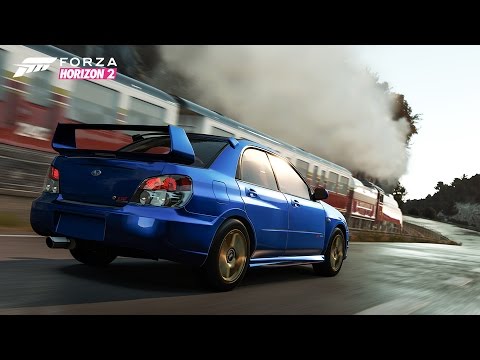