NBC TO REMAKE THE IT CROWD (AGAIN)

Lou Cypher Make Reasonable Choices.H. E. Double Hockey SticksMembers Posts: 52,520 ✭✭✭✭✭
October 2014 in Lights, Camera, Action!
After trying and failing to make an American version of The IT Crowd once before, NBC is once again trying to adapt the popular British comedy for U.S. audiences.

According to Deadline, NBC has given a put pilot commitment to a new version of The IT Crowd, executive produced by Scrubs creator Bill Lawrence. Written by Community alums Neil Goldman and Garrett Donovan, the American version of The IT Crowd will be a multi-camera sitcom following two IT guys who know nothing about social interaction and their new female manager who knows nothing about computers. 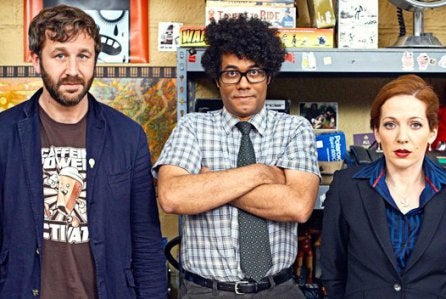 Chris O’Dowd, Richard Ayoade, and Katherine Parkinson in the original IT Crowd

If this sounds familiar, it's because NBC attempted to adapt the show back in 2007. It was picked up for midseason, but then mysteriously scrapped at the last minute. That version would have starred Joel McHale, who went on to star in NBC's Community when the show fell through.

As of now, there is no word on this iteration's casting or when we can expect it to premiere.