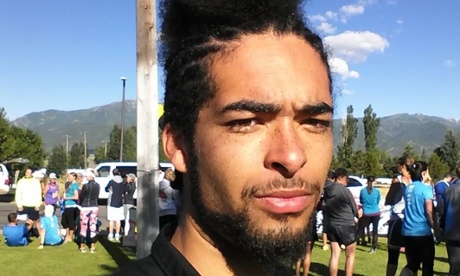 A state autopsy confirmed that police shot Darrien Hunt, a 22-year-old black man who was carrying a replica samurai sword as part of an anime costume, six times. Four of those shots hit him from behind.

The fatal shooting occurred Sept. 10 outside a strip mall in Saratoga Springs, Utah, a suburb of Salt Lake City. The official story is that Hunt charged at two officers with the sword, and one of them fired three times. Police fired four more shots as Hunt ran away from them.

Hunt's family disputes that he attacked the cops, and they say the 2 1/2-foot sword, which did not have a sharp edge, was bought at a gift shop and was purely decorative. Hunt, who left behind notebooks full of manga-style drawings, was wearing a red top and blue pants at the time of his death. He was apparently dressed as Mugen from Samurai Champloo.

According to Hunt's aunt, a bystander reported Hunt "had his earbuds in, and was kind of doing spins and stuff, like pretending he's a samurai."

The family's lawyer, Robert Sykes, points to gunshot trajectories that, according to the Utah County Attorney's Office, indicate that Hunt was turning away when he was hit.

"I think that means they were pursuing him, he was running away. He was probably scared to death," said Sykes, according to the AP.

Sykes also said a witness had taken a photo that showed Hunt smiling as he talked to Cpl. Matthew Schauerhamer and Officer Nicholas Judson just before they fatally shot him.

The County Attorney's Office confirmed that when the officers showed up to respond to a 911 call about a man with a sword, Hunt asked them for a ride.

The county's investigation into whether the shooting was legally justified is expected to wrap up by next week.
1 · Share on TwitterShare on Facebook
«12»