Yes, the 2016 race for the White House has already gotten started -- and it looks like
Dr. Ben Carson is first in the ring.

Carson, a famous pediatric neurosurgeon and conservative political star, will air a nearly
40 minute-long ad introducing himself to the American people this weekend in his opening
bid for the Republican nomination, an aide to Carson confirms to ABC News.

The documentary titled “A Breath of Fresh Air: A New Prescription for America” will air in
22 states and Washington, DC. The paid video will detail some of his biography and family
life, including his rise from being born to a single mother with a poor childhood in Detroit to
director of pediatric neurosurgery at Johns Hopkins for almost 40 years, known for his work
separating conjoined twins, to potential 2016 presidential candidate.

Carson first became a conservative star when last year he created a buzz at the National
Prayer Breakfast when in front of an audience that included President Obama and Vice
President Biden he spoke out about political correctness, health care and taxes.

He also called for a private health care savings plan and a flat tax in the speech that
went viral and led to an editorial in the Wall Street Journal titled Ben Carson for President.
He is known as a fierce opponent of the president’s health care law known as Obamacare.

In an ABC News/Washington Post poll from last month of the potential 2016 presidential
candidates showed Carson in seventh place garnering seven percent of the vote after
other notables including Jeb Bush, Mike Huckabee, Chris Christie, and Marco Rubio.

Carson has a grassroots effort to draft him for a 2016 presidential run that has raised
millions for the effort. In an interview last month with Jorge Ramos on our sister network,
Fusion he said he’s considering a White House run.

“No, I don’t want to be president. Why would any sane person want to do that?” Carson
said, acknowledging he has noticed the support. “I think I have to consider that, with so
many clamoring for me to do it.”

The Washington Times first reported the news of Carson’s video. A production company
run by Armstrong Williams, a conservative commentator, is paying for the airtime. They
also filmed the documentary. Williams is Carson’s business manager.

As it says in the article, this guy is "managed" by Armstrong Williams. So,
you know what his agenda is. 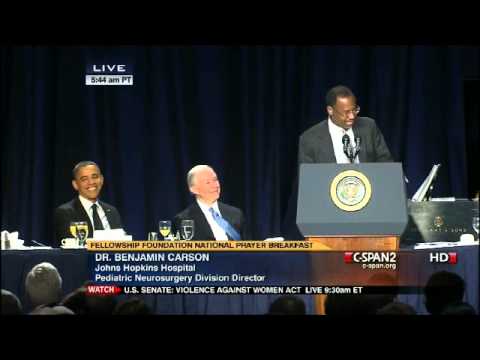