James Cocklereese, a homeless resident of Berkeley, California, has been sentenced to two years of probation. But what led to that sentence was the apparent unprovoked beating he received from a man who works as an ambassador for the homeless with the Downtown Berkeley Association (DBA).

The incident was caught on camera, in which DBA staffers Jefferey Bailey and Carmen Francois approached Cocklereese and another homeless man, Nathan Swor, to ask them to leave an area they had been camped out in. After Cocklereese can be seen and heard yelling curses at the staffers, Bailey punches him in the head and then continues punching him at least ten times after he’s on the ground. 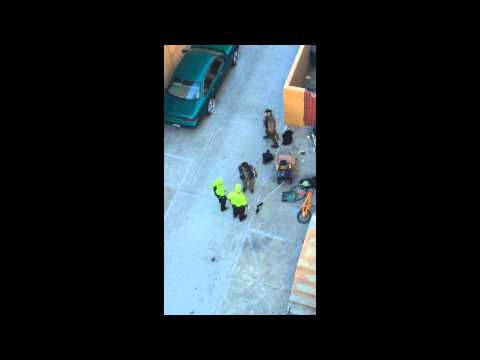 At the end of the video, as the two homeless men are packing up their belongings to leave, Bailey can be seen pinning Swor into a corner and heard saying, “I swear I will knock you out.”

Bailey initially filed a report to his superiors about the incident, claiming he acted in self defense. The police report says that Swor brandished a pole with a blade attached to it, and that Cocklereese “raised his fist, and charged the victim,” neither of which can be seen on the video.

But after the Youtube video surfaced, the DBA said it had fired him and suspended Francois. So far neither has been charged.

Cocklereese and Swor, on the other hand, have been charged with seven misdemeanor counts. They both entered no contest pleas on Monday and will be sentenced to two years of probation. They will also have to pay into a restitution fund and will be subject to law enforcement searchers. After Cocklreese admitted to a probation violation, he will have to work for 30 days in a sheriff department program.

DBA CEO John Caner has called the assault “shocking” and said, “We’re taking steps to do whatever we can to make sure it doesn’t happen again.” He blames the incident on a problematic individual but said the association will expand a training program for its ambassadors.

But advocates for the homeless say the assault is part of a larger problem with the DBA. As many as 15 people took to the streets on Friday to protest what happened. David Teague, and advocate known as Ninja Kitty, said at the demonstration, “It doesn’t stem [from] this individual ambassador… When it comes to an ambassador’s word against [a] homeless [person’s], the ambassador’s word is gold.” Bob Offer-Westort of Streets Are for Everyone agreed, telling ABC 7, “If there’s a conflict and the ambassador reports, ‘this person assaulted me,’ then the cop is likely to believe the ambassador and arrest the person for assault.”

The homeless face many challenges, one of them being run-ins with city officials and police, particularly given the growing adoption of ordinances that effectively criminalize homeless people’s lives. Many of these are put into place at the behest of local businesses.

The homeless are also at an extremely elevated risk of violence, although it often comes from passing strangers, rather than those purportedly there to help them. There were at least 109 violent attacks against the homeless from non-homeless assailants in 2013, 18 of which were fatal, a 24 percent increase over the year before. Over the last 15 years, 375 homeless people were murdered.
A big part of the problem, of course, is that the homeless sleeping outside — more than 135,000 people on any given night at last count — are left exposed.

Ninja Kitty has been on a housing waiting list for two years and said, “They expect us to magically disappear while we wait and they attack and assault us while we have nowhere to go.” Criminalization is effectively a way to try to sweep the problem of homelessness aside while often increasing the risk of run-ins with police, which is not just another challenge for the homeless but eats up local government resources.