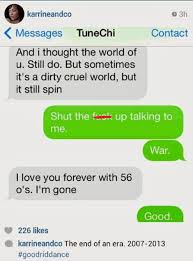 It’s not exactly news that Karrine “Superhead” Steffans isn’t down with her ex Lil Wayne’s new boo, Christina Milian. But now you better put on a coat—because Superhead’s about to get super shady.

During a recent interview the hip hop video icon fired some major shots at Christina, insinuating that she used sex with Weezy to land her Young Money/Cash Money record deal. And lucky for us, it was all caught on camera. (The diss, not the Weezy sex.)

“We have had sex with a lot of same men over the years,” she says of Christina. “I’ve been introduced to her in the past along the trail of getting record deals in exchange of…whatever.” Anyone want to guess what she means by “whatever”?

This isn’t the first time that the pair have clashed. Back in January, the two threw jabs at each other via Twitter, where Christina told Superhead that she wasn’t on her level.
0 · Share on Facebook