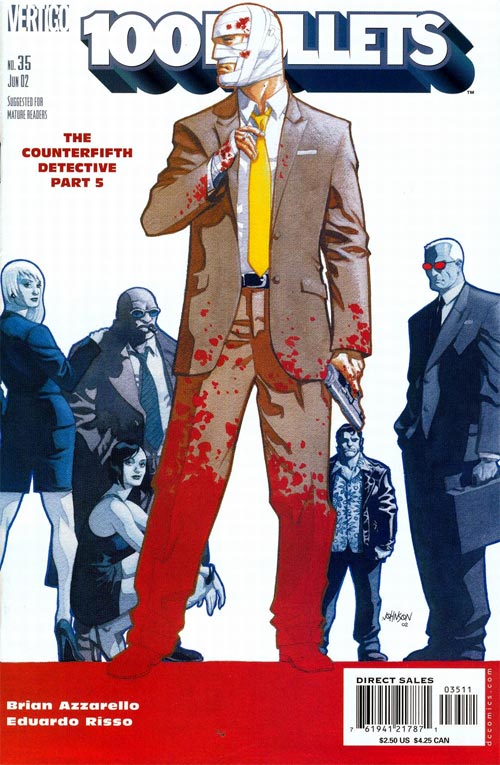 New Line and Tom Hardy are loading up on 100 Bullets.

In the first move since taking oversight of DC Entertainment’s Vertigo comics line from corporate sibling Warner Bros., New Line is developing an adaptation of the acclaimed comic by Brian Azzarello and Eduardo Risso.

Hardy, who played villain Bane in The Dark Knight Rises as well as starred in this summer’s Mad Max: Fury Road, is on board to produce the adaptation with an eye to star. He will produce with Dean Baker via the duo’s Hardy Son & Baker production shingle.

The project is already down the line in development, having a script by Chris Borrelli, whose credits include the recent supernatural horror movie The Vatican Tapes.

Running for 100 issues from 1999 to 2009, the acclaimed comic centered on an enigmatic man named Agent Graves as he presents different people, for reasons unknown, with a gun, the identity of the person who ruined their lives … and a hundred rounds of untraceable ammunition.

Over the course of the series emerged a large crime saga that won accolades in the form of Eisner and Harvey Awards for Azzarello, Risso and the comic.

The plot for movie is being kept locked in a briefcase but insiders say the plan is to stay true to the comic.

In a reshuffling of the slate that occurred in late June, New Line absorbed production and development of DC’s Vertigo, the imprint that tends to be edgier, creator-focused and multi-genre when compared to DC Comics, the home of four-color heroes such as Batman and Wonder Woman and Flash.

New Line is overseeing the adaptation of Sandman, the Vertigo title created by Neil Gaiman that has Joseph Gordon-Levitt involved as star and director but that was already in active development at Warners when the transfer occurred. 100 Bullets is the first Vertigo feature project to actively move forward in any way since New Line took over the line.
6 · Share on TwitterShare on Facebook