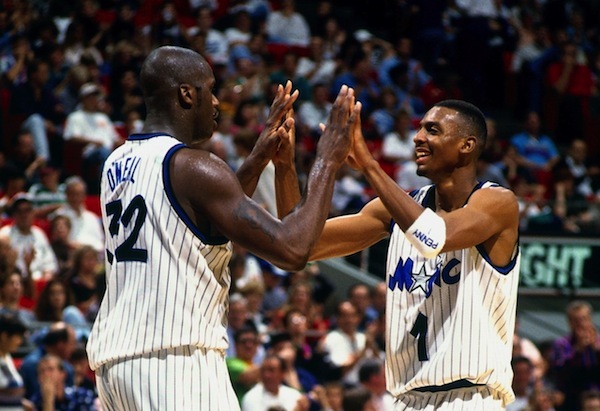 The critically acclaimed 30 for 30 documentary series on ESPN will turn its attention to the mid-90s Orlando Magic in April, ESPN Films announced.

In the latest batch of 30 for 30 documentaries, ESPN Films will profile the 1985 Chicago Bears that won the Super Bowl, the Duke Lacrosse scandal, the connection between Darryl Strawberry and Dwight Gooden with the New York Mets and, in a first for the series, a multi-part miniseries examining O.J. Simpson.

Magic fans though will surely be glued to their TVs for that April premiere date of the documentary on one of the most interesting and promising teams of that era. Orlando Magic fans certainly look back at those mid-90s teams as the greatest in franchise history and the most promise the team has ever had to win a title.

The documentary was produced by the stars of that team, Shaquille O’Neal and Anfernee Hardaway, so there is the potential for it getting a bit too nostalgic and not diving deep enough into the story of the rise and fall of that stellar team.

It was directed by Erin Leyden, who previously directed the documentary The ’99ers for ESPN’s 9 for IX series examining women’s sports. The ’99ers used handheld camera footage taken during the U.S. Women’s National Team’s run to the World Cup title in the 1999 World Cup, an iconic moment in women’s sports and in U.S. sports history.

Leyden was a senior producer for 16 episodes of the 30 for 30 documentary series. And The ’99ers was a very good documentary. The storytelling was in very good hands and Magic fans should look forward to seeing the final product. It is the only documentary she has previously directed.

The mid-90s Magic have become a bit of a fascination 20 years now since the team surprisingly upset Michael Jordan and reached the NBA Finals in 1995.

Last April, Jonathan Abrams wrote an oral history of the team for Grantland, going into the rise and fall of the young team that had so much promise.

During All-Star Weekend in Orlando in 2012, Shaquille O’Neal, Anfernee Hardaway and Dennis Scott sat down for one of the first frank and honest conversations the stars of the team have had about those years since they retired:

That Magic team still holds a lot of resonance and fascination even 20 years after its break up. Shaquille O’Neal and Anfernee Hardaway certainly still resonate with the fans in Orlando and around the NBA world.

The 30 for 30 will hopefully recapture the hope and excitement of those teams and introduce the team again to a younger and national audience.

Of course, in the end, the story is a tragedy. A footnote in the story of Michael Jordan in the larger NBA narrative. The 30 for 30 series though is supposed to memorialize these kind of stories.