1CK1S Members Posts: 27,472 ✭✭✭✭✭
February 2016 in IllGaming
Following the game's announcement last month, Funcom has now shared new screenshots for Conan Exiles and released a "developer diary" video in which designers talk about the game's story and ambitions. You don't play as Conan the Barbarian, but rather as an "exile" who has been crucified and left to die. Conan cuts you down, hands you his ax, and challenges you to set out and dominate the world. 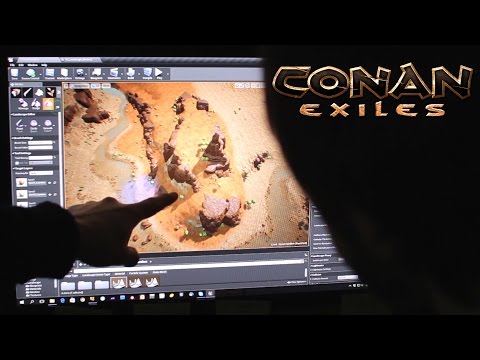 You start with nothing in Conan Exiles and must find shelter and gather resources. Your ultimate goal is to rule a kingdom, and it will take some amount of combat to get there.

In keeping with the Conan tradition, Conan Exiles aims to be brutal as it relates to violence.

The full video also showcases some of the technology behind Conan Exiles, including tessellation-based displacement for foot-imprinting in the sand. There is also a system that allows sand to blow across the desert surface. This could eventually be applied to elements like water and snow, a designer said.

As for the new screenshots, they show off the game's sand-swept word and some animals like a rhinoceros and hyena. Note that these are pre-alpha screenshots.

Based on the video and screenshots, it seems like it's still pretty early days for Conan Exiles, which is described as an open-world game. It is multiplayer-centric, though you can play alone, too.

The game will launch for PC through Steam Early Access this summer; a console version is also in the works, but Funcom did not provide any details on it outside of announcing its existence.
2 · Share on Facebook