Venezuela’s high rise slum “The Tower of David”: can (will) it happen in America?

In 1990, construction began on the Centro Financiero Confinanzas, a huge high-rise office complex in Caracas, Venezuela. Construction halted in 1994, after a banking crisis and the death of the building's main investor, David Brillembourg. The 45-story tower stood vacant until 2007, when squatters began moving in, displaced by a massive housing shortage in Caracas. Authorities turned a blind eye, and the skyscraper, nicknamed the "Tower of David" (after David Brillembourg), is now home to more than 3,000 residents. The third-highest skyscraper in the country has been jury-rigged with electricity and water up to the 22nd floor. Reuters photographer Jorge Silva spent some time with tower residents earlier this year, returning with these photographs of the world's tallest slum.

***Additional photos in link below*** 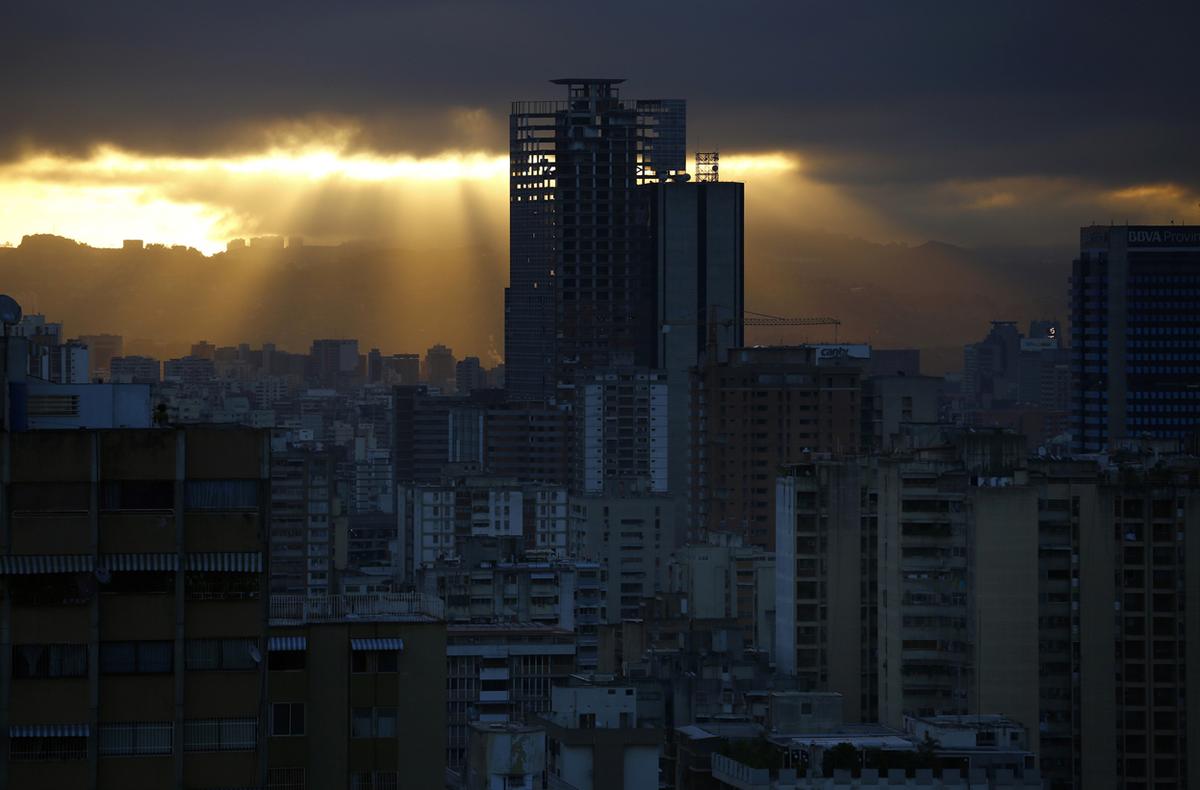 The unfinished Tower of David stands above Caracas on January 31, 2014. 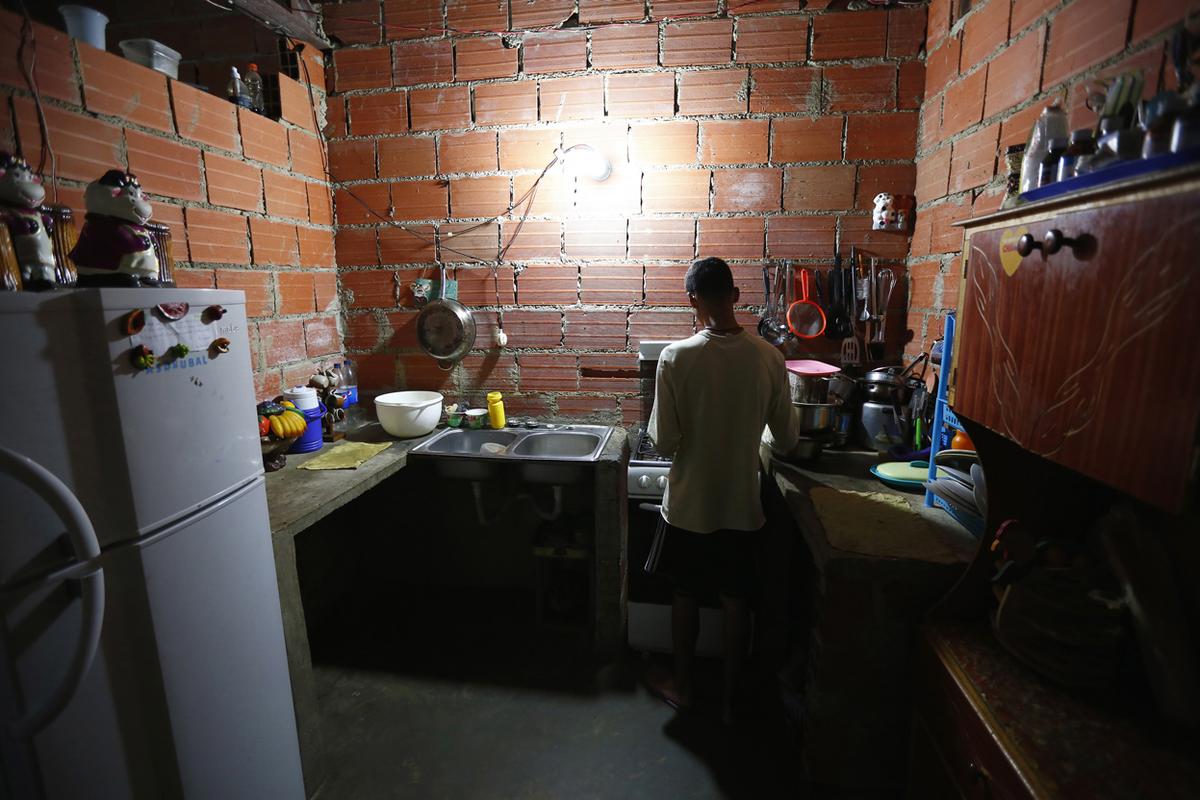 Francisco, 18, cooks in his apartment inside the Tower of David on February 9, 2014

Fall Of The Tower Of David: Squatters Leave Venezuela's Vertical Slum
July 23, 20146:07 PM ET
Venezuela's government began to evacuate a famous "vertical slum" in Caracas Tuesday, bringing an end to a self-made community that became famous for its apocalyptic image, symbolic overtones and appearance in the Showtime series Homeland.

The half-finished skyscraper, called the "Tower of David" for its financier, David Brillembourg, was abandoned during a banking crisis in the '90s, according to The Associated Press. Years later, with the encouragement of Venezuela's late President Hugo Chavez, poor residents took over the building.

"By 2007, squatters had claimed everything from the parking garages to the rooftop helipad," the AP reports. "They rigged up electricity, opened up stores and barbershops, and created an internal management system."

The Tower is a complex symbol — of failed capitalism, anarchic dysfunction and self-built community, the wire service says. Twenty-eight floors of the 45-story structure are illegally occupied, complete with beauty parlors and day-care centers, says Reuters photographer Jorge Silva. "One could live here without ever having to go outside," Silva writes…

"Necessity brought me here, and the tower gave me a good home," said Yuraima Parra, 27, cradling her baby daughter as soldiers loaded her possessions into a truck before dawn.

"I was here for seven years. I'm going to miss it, but it's time to move on."

Residents were going to new homes in the town of Cua, south of Caracas, under the state's Great Housing Mission project - a flagship policy of late socialist leader Hugo Chavez.

Nicknamed after its developer, the financier and horse-🤬 David Brillembourg, the Tower of David was viewed by many Caracas residents as a focus for crime gangs and a symbol of property "invasions" encouraged in the Chavez era.
Residents, though, said the building became a refuge from the city's crime-ridden 'barrios' and had turned into something of a model commune.

Inside there was evidence of hyper-organization everywhere: corridors were polished daily; squatters who had first arrived in tents then partitioned spaces into well-kept apartments; work schedules, rules and admonitions plastered the walls.
http://www.reuters.com/article/us-venezuela-tower-idUSKBN0FR19320140722 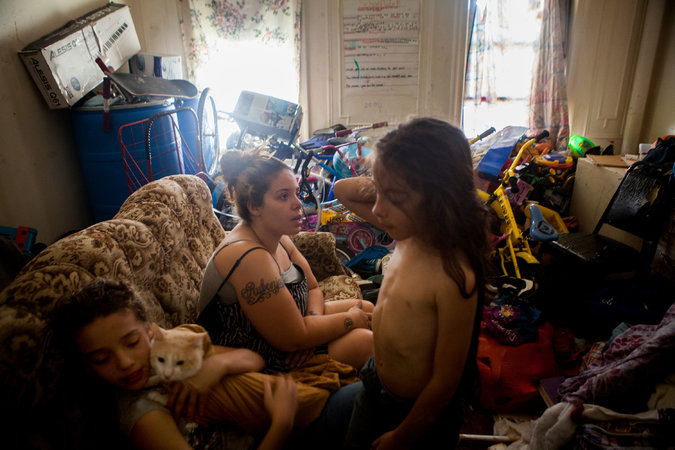 Merlinda Fernandez, center, at her apartment, in one of about 400 private buildings that house homeless people in New York. Credit Sam Hodgson for The New York Times

Beyond the unlocked front doors of 60 Clarkson Avenue in Brooklyn, the lobby is a half-lit cavern, its ornate plaster moldings and patterned floor smeared with dirt. The windows gape onto a courtyard dense with weeds and trash. On the days when it comes at all, the elevator smells of 🤬 .

Inside Apartment 6M, where Merlinda Fernandez, her husband and their six children have lived for five years, cockroaches saunter along the walls and invade the refrigerator, and mice nestle in the baby’s blanket. Toys lie untouched in their packaging, the only way the family knows to keep them safe from the roaches.

A sticker on the door reads, “Bless this home with Love & Laughter.”

Ms. Fernandez and her family are among hundreds of homeless people sent in the past six years to the building because they had nowhere else to go…

Profits for a Landlord

The 83-unit brick building at 60 Clarkson Avenue sits atop a vast chunk of its slowly gentrifying block. It is just one of many buildings scattered across the city where homeless families came to live alongside, and often displaced, rent-regulated tenants.

Its current owner, Barry Hers, bought it at a foreclosure auction in 1995. As he had done with other buildings, Mr. Hers said, he began renting some of the rent-stabilized apartments to people looking to escape homelessness, accepting federal Section 8 vouchers or other rental subsidies.

The city first began placing homeless families in private buildings in 2000, under the Giuliani administration, when the homeless population overwhelmed the shelters. City officials promised that the program, then called scatter-site housing, was temporary. But it only grew, climbing from 50 units at the start to more than 2,000 by December 2002, when it housed 21 percent of all homeless families in the system.

The city paid around $2,800 a month per apartment to each landlord for rent and furniture, creating what critics said was an unintended side effect: As landlords realized that homeless families in need of scatter-site housing could be more lucrative than their regular tenants, they began pushing out their original tenants, offering them money, trying to evict them or simply letting conditions crumble until they left.

Critics of the program, including advocates for homeless people, community leaders and elected officials, denounced it as a stopgap that papered over one problem only to worsen another, pushing low-income residents out of their homes and removing otherwise affordable apartments from circulation.