As Hillary Clinton and Bernie Sanders head to the South Carolina primary, they have increasingly focused on trying to recruit black voters to their presidential campaigns. And it's gotten a bit weird — with both sides, and particularly white supporters, now throwing up endorsements from civil rights, racial justice, and Black Lives Matter leaders as a sign black voters should support them.

The cartoon "Black Endorsements Matter," from cartoonist Matt Bors, captures how weird this has all gotten in online debates over the candidates: 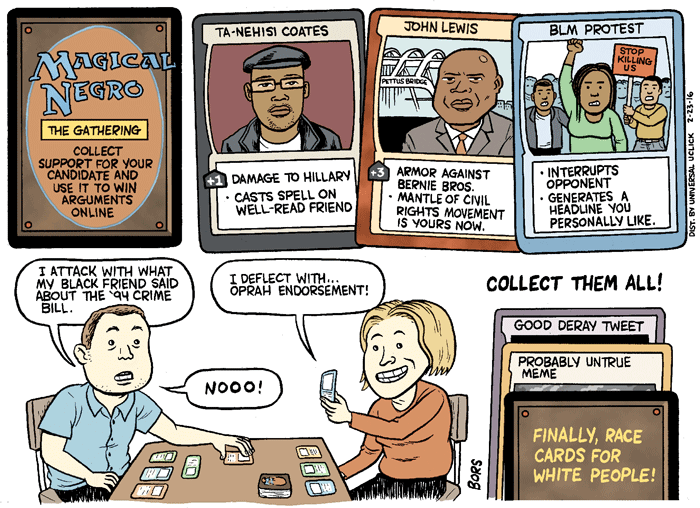 Bors explained the cartoon in a post at the Daily Kos:

The "Magical 🤬 " is a trope in cinema where a black supporting characters are "portrayed as coming to the aid of a film's white protagonists" and who "possess special insight or mystical powers," as Wikipedia has it written up. From who Ta-Nehisi Coates is voting for, to shots at John Lewis and Killer Mike's respective endorsements and missteps to reconciling the '94 crime bill and various problematic statements over the years, black support of candidates have become like Magic cards, used to defeat foes in online combat.

Here is one example from r/politics, which is notoriously pro-Sanders and tends to upvote posts that are favorable of Sanders and critical of Clinton so they end up on the front page of the subreddit:

Four posts in a row on the front page of r/politics were about the exact same event: a protester questioning Clinton for her comments about "superpredators," a racially charged term about black crime, and asking her to "apologize to black people for mass incarceration."

Of course, Clinton supporters are guilty of doing this as well. They promoted, as one example, civil rights hero Rep. John Lewis's comments that he never saw or met with Sanders at civil rights protests — a shot against Sanders's past remarks that he protested segregation in the 1960s. (Sanders did protest; the question is just how involved he really was and how relevant that is to today's Black Lives Matter protests.)

It's very weird, and it feels kind of exploitative. But it's what the Democratic primaries have apparently been reduced to, as black voters are likelier to decide the party's next nominee.