Ken Loach stuns at Cannes 2016 with Palme d'Or win for I, Daniel Blake

dontdiedontkillanyon Show me some love, you losers.Members Posts: 10,172 ✭✭✭✭✭
May 2016 edited May 2016 in Lights, Camera, Action!
Ken Loach stuns at Cannes 2016 with Palme d'Or win for I, Daniel Blake

The 79-year-old Britain has triumphed at the Cannes film festival for the second time with his welfare state drama, as Andrea Arnold’s American Honey takes third prize and dark horses pick up awards across the board 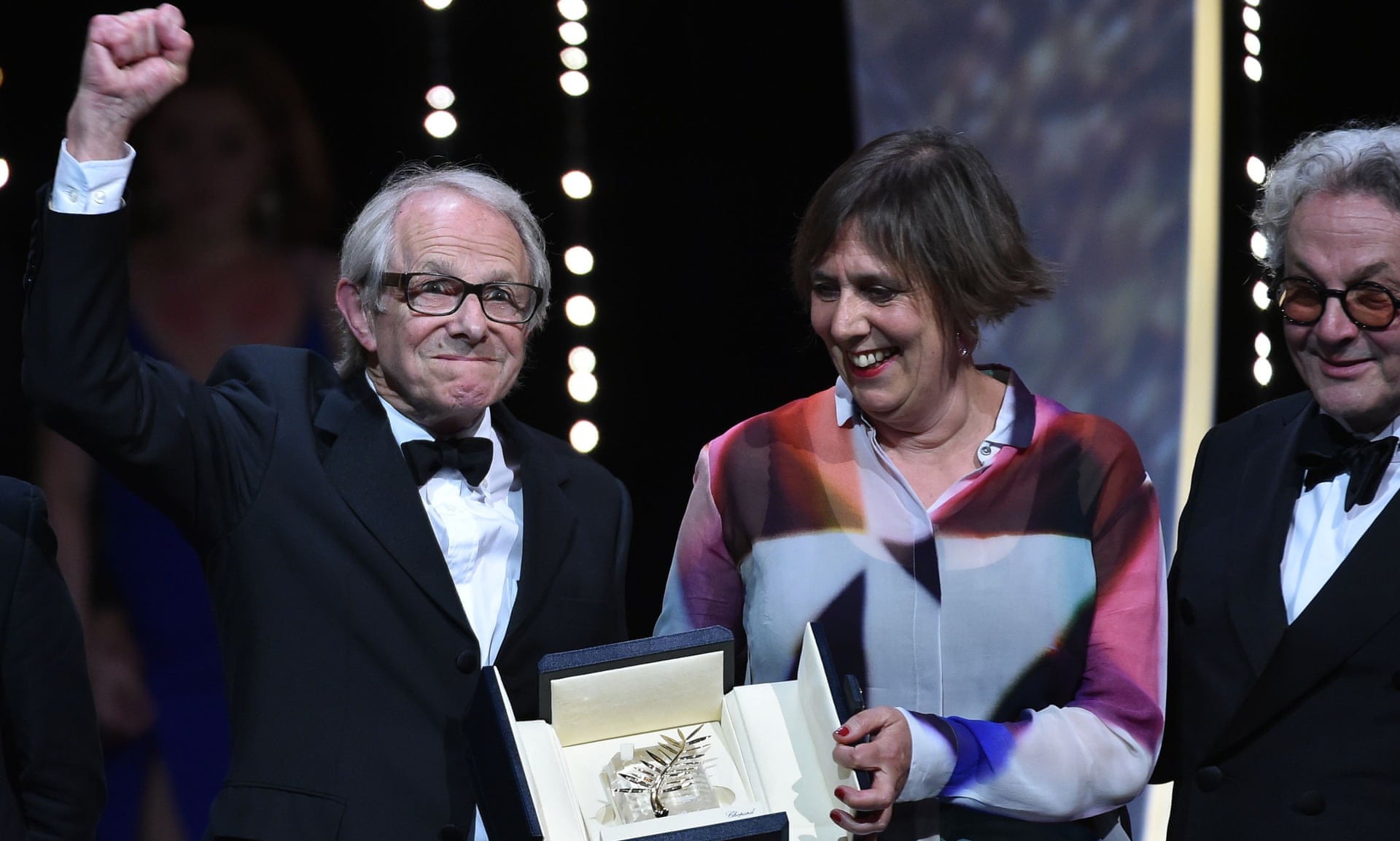 There were shocks and surprises – and even talk of a renegade jury – at the closing ceremony for the 69th Cannes film festival. Few of the perceived favourites picked up prizes, while some movies derided as turkeys triumphed – and the one-award-per-movie rule also appeared to have been torn up.

Ken Loach won his second Palme d’Or – the festival’s highest honour – for I, Daniel Blake, a socio-realist drama about a disabled carpenter struggling with the red tape of the welfare system. The director, who turns 80 next month, returned from retirement to make the film, and took to the stage at the Palais to address the audience in French.

“The festival is very important for the future of cinema,” he said, instructing all present to “stay strong.”

Loach continued by saying it was “very strange” to received the award in such glamorous surroundings, considering the conditions endured by those people who inspired the film.

“When there is despair, the people from the far right take advantage,” said Loach. “We must say that another world is possible and necessary.”

Loach has a very loyal following in Europe: many of his films have premiered at Cannes, while The Wind That Shakes the Barley, about two brothers who join the IRA in the early 1920s, won the Palme d’Or in 2006. Yet few foresaw victory for the veteran dramatist on Sunday.

The prize for best director was a tie between Graduation, Cristian Mungiu’s Romanian drama about a doctor’s daughter struggling with her exams and Olivier Assayas’s Personal Shopper, a horror starring Kristen Stewart as a recently-bereaved psychic PA in Paris.

The first film was warmly – if soberly – received; the second was greeted with boos at its press screening – although not quite as many as met It’s Only the End of the World, Xavier Dolan’s melodrama about a young man who returns to his family to tell them he’s dying.

That film took the Grand Prix – or runner’s up award – marking the second time Dolan has triumphed, following 2014’s Mommy. In an emotional speech, the 27-year-old French Canadian thanked his producer for “feeling the emotion of the film”.

“Emotion is not always easy to share with others,” he continued. “Violence can sound like a scream. All we do in this world, we do to be loved. Me, especially. To be accepted. The more I grow, the more I direct, the more difficult it is to be understood. I now know who I am.”

Meanwhile British film-maker Andrea Arnold won her third Jury Prize (after Red Road and Fish Tank) for American Honey, a lyrical road-trip across the US. Many had anticipated a more substantial award for the film which, alongside Maren Ade’s Toni Erdmann, was considered one of the frontrunners.

“When I’m happy I want to dance,” said Arnold in a speech in which she thanked her team.

Asghar Fahardi’s The Salesman – a quiet thriller about an actor wrestling with his desire for vengeance after his wife is assaulted in their flat – took best actor for Shahab Hosseini and best screenplay for the writer/director. “I wasn’t expecting a second award for the film,” said Fahardi on stage.

Jaclyn Jose won best actress for her role as an impoverished mother fighting police corruption in Brilliante Mendoza’s Manilla-set crime thriller Ma Rosa. She took expressed shock. “I am so surprised,” she said on stage. “I just walked the red carpet with my daughter.” Jose thanked the festival before dedicating her award “to the Philippines”.

The jury this year was chaired by Mad Max director George Miller, whose Fury Road was one of the breakthrough films of last year’s festival.

His fellow jurors included Laszlo Nemes, whose Oscar-winning Auschwitz drama Son of Saul also premiered at Cannes in 2015, as well as actors including Donald Sutherland, Kirsten Dunst and Vanessa Paradis. Speaking at the start of the ceremony, Miller described the previous fortnight as “exhausting but one of the best experiences of my life”.

“We must commend the festival for this feast of cinema,” he said. “We passionately and fiercely debated the films. Nothing was left unsaid.”

Divines – about a teenage girl in the Paris suburbs, commended as a successor to La Haine – won the Camera d’Or for best debut. Its director, Houda Benyamina, used her time onstage to ebulliently cheerlead for more female directors.

“Cannes is ours,” she said. “We are here! It’s possible. The fact that a woman won the prize is a curiosity; things have to change. It’s about time.” Benyamina then paid tribute to her female producer, before crying out “Another woman!” and “Vive directors!”

The honorary Palme went to Jean-Pierre Léaud, the veteran French actor best known for his work with François Truffaut. Léaud, now 71, played the character Antoine Doinel in a series of films by the new wave icon, starting with 1959’s The 400 Blows. The juror Arnaud Desplechin made emotional tribute in his introduction, which was followed by a prolonged standing ovation.

In his speech, Léaud remarked: “Cinema is the only art the captures death at work, like bees we can see dying in a hive.”

Despite the unexpected end, the verdict on this year’s festival was that it passed without the cinematic fireworks of some previous editions, with fewer films debuting on the Croisette likely to be loom large in the awards conversation. Yet the relative peace outside the Palais was a triumph, with heightened security and 500 extra policemen apparently fending off any terrorist threat.