I just watched Pinocchio for 1st time in about 20yrs and WOW... thats some dark 🤬

TheGOAT El CoyoteunknownGuests, Members, Writer, Content Producer Posts: 15,916 ✭✭✭✭✭
June 2016 in Lights, Camera, Action!
Sat down and watched with my 4yr old yesterday and did not remember it being so 🤬 up.

Jiminy Cricket was funny as i remember but i never realized how 🤬 he was. Touchin and staring at Gippetos female crafts. (Gippeto has his own whole set of problems) Plus hes all over the ferry whenever shes around.

Whats crazy and creepy is the 🤬 pinocchio goes thru.

Gets kidnapped on the way to school.

Freed only to be kidnapped again and sold to a child trafficker who is a 🤬 . (Even the bad guys who kidnapped pinocchio were scared of this guy.

He loves "dumb little boys" who he takes to "pleasure island". Gets them 🤬 and strips the clothes off of them as they turn into donkeys. 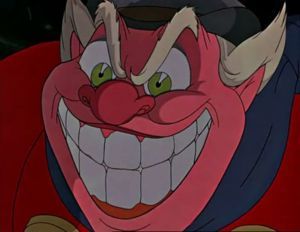 🤬 was crazy. And im skippin alot of the details.

I looked it up and there are tons of articles written on the dark side of Pinocchio. One article says Hunchback of NotreDame is maybe the only darker Disney film. Ive never seen that. Has anyone else?

Anyways. Everyone should watch Pinocchio again 🤬 was a trip. Made me wish i had some shrooms while watching it