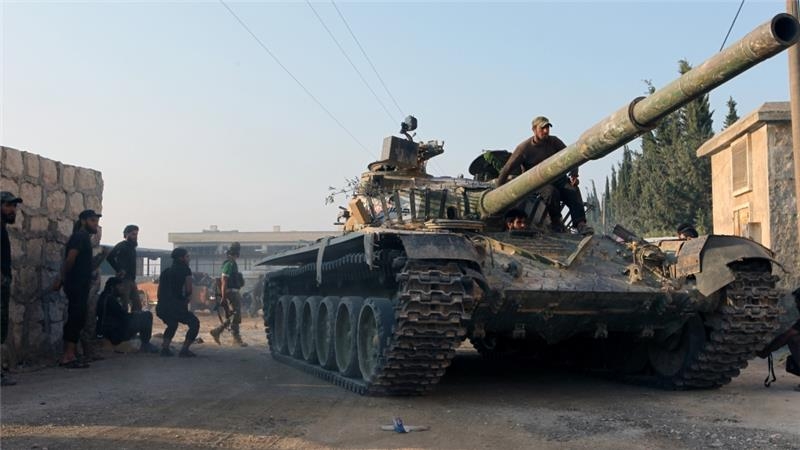 A Syrian rebel alliance has announced the start of a battle to recapture the whole of Aleppo, a day after it broke a government siege on the rebel-held half of the city.

The Army of Conquest, a coalition of rebel groups including Jabhat Fatah al-Sham (formerly the al-Nusra Front), said in a statement on Sunday that it would "double the number of fighters for this next battle".

"We announce the start of a new phase to liberate all of Aleppo," the group said. "We will not rest until we raise the flag of the conquest over Aleppo's citadel."

Footage obtained by Al Jazeera showed rebel fighters at government checkpoints on Saturday after breaking the month-long siege on the rebel-held eastern neighbourhoods of the city in a major setback for the forces of President Bashar al-Assad.

A convoy of rebel pick-up trucks entered the city's opposition areas through a newly opened route on Sunday, bringing food aid for some of the 300,000 residents who had been trapped inside.

The breaking of the siege triggered celebrations in Aleppo's eastern districts, but fierce fighting and continuous Russian and Syrian air strikes in and around the Ramosa district prevented safe passage for residents.

Rami Abdel Rahman, head of the Britain-based Syrian Observatory for Human Rights (SOHR), said it was one of the most significant defeats for the government since the conflict erupted in March 2011.

Fears grew on Sunday in the government-controlled western half of the city of food and fuel shortages as rebels attempted to surround it.

Rebels on Saturday pushed northeast into Ramosa where they linked up with fighters who had been inside the city.

"After a large-scale military operation carried out in six stages, the Conquest Army managed to put an end to the siege," Al Jazeera's Amro Halabi, reporting from the rebel-held half of the city, said.

The rebel frontline was pushing northwest into western, government-held Aleppo, on the the edges of the Hamdaniya neighborhood and a housing project called the 3,000 project, according to rebels and the SOHR, which relies on a network of contacts in Syria to track the war.

“The battle for Aleppo is decisive. Whoever wins the battle could perhaps win the war. For the rebels, keeping hold of Aleppo is leverage – it’s a bargaining chip that they could use to perhaps force the Syrian government back to the negotiating table in Geneva,” Al Jazeera’s Reza Sayah, reporting from Gaziantep on the Turkey-Syria border, said.

“At the same time, if the government is able to take over Aleppo, they take away that bargaining chip. If they have control of the city, there’s no longer incentive for them to go back to Geneva.”

The rebel advance puts an estimated 1.2 million people in government-held districts under opposition siege, Rahman of the SOHR told the AFP news agency.

"The western districts of Aleppo are now besieged. There are no safe routes for civilians in government-held districts to use to get into or out of the city," he said.

In rebel-held areas, the lack of a safe route out meant conditions for residents were unchanged.

Three vans of vegetables crossed into east Aleppo, Rahman said, but this was a symbolic gesture and the corridor was too dangerous for civilians or significant supplies to pass.

The United Nations and aid groups said conditions in rebel-held districts were a cause for concern.

"Most recently I'm hearing that the markets are closed and it's next to impossible to purchase food. The UN estimates that collectively all aid supplies in east Aleppo will only last about two more weeks," Christy Delafield, senior communications officer for Mercy Corps, which runs the largest non-governmental aid operation inside Syria, told the Reuters news agency.

The battle for Aleppo, Syria's second biggest city, has raged since mid-2012 and is among the fiercest in the multi-front war that has killed nearly 400,000 people, according to an estimate by the UN's chief mediator.