New York City cops raided a family’s home in Brooklyn at the break of dawn Thursday, handcuffing every family member while searching the apartment unit for three hours before realizing they had the wrong home and leaving.

Next thing the family knew, a photo showing them handcuffed while sitting on the couch appeared on Snapchat with the caption, “Merry Christmas it’s NYPD!”.

Another photo also appeared on Snapchat with the caption “Warrant sweeps Its still a party smh.”

Now internal affairs is investigating, but have refused to release the names of the officers involved.

According to ABC 7, which interviewed the family:

“The worst part was the Snapchats,” Kimberly Santiago said. “That’s what really got to me.”

“The things that he wrote, it’s like, this what you all do?” Santiago said. “If he did that to, picture how many other families he’s done that to. And he was the only one standing there watching us.”

“Ya’ll know that when you came to this house, looking for the wrong person that we don’t even know,” she said.

“We thought he was texting on his phone,” she said. “Because the whole three hours we were sitting here, he was the one standing there. We saw him on his phone, but we didn’t think an officer would do that.”

The photos appeared in the New York Story feed on Snapchat, which is a smartphone app where photos last 24 hours and receives more than a billion views a year, according to Wikipedia, which describes the app as focusing “on the ephemeral nature of fleeting encounters.”

In 2013, Gizmodo reported that Snapchat regularly hands over unopened messages to police to assist them in investigations. 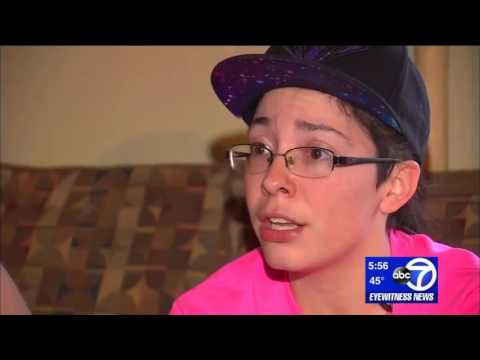 BROOKLYN — An NYPD officer was suspended without pay after posting a photo of a handcuffed family to Snapchat, police said.

Police confirmed the picture was accompanied by the caption, "Merry Christmas Its NYPD."

The incident was first reported by ABC 7.

Officers with a warrant raided the family's Brownsville home at 6:30 a.m. on Thursday, Dec. 22 and placed everyone in the apartment in handcuffs during the search, police confirmed.

Police said the warrant authorized the officers to search the apartment on Dumont Avenue, the Associated Press reported. The officers remained there for about three hours, reports said.

The NYPD did not provide information on why the apartment was being investigated, other than to say they were looking for someone at that address. The person ultimately was not found there, the NYPD said.

The suspended officer works with the 73rd Precinct, the NYPD confirmed, though police did not name him.

A member of the Brownsville family told ABC 7 that she and her family thought the officer was texting during the raid.

"The whole three hours we were sitting here, he was the one standing there. We saw him on his phone, but we didn't think an officer would do that," Kimberly Santiago told ABC 7.

The officer posted a second Snapchat of the family with the caption, "Warrant sweeps Its still a party smh," the NYPD confirmed.

Santiago told ABC 7 that the worst part of the raid were the Snapchats.

"The things that he wrote, it's like, this [is] what you all do?" Santiago told ABC 7. "If he did that to [us], picture how many other families he's done that to. And he was the only one standing there watching us."

The incident is under internal review, according to an NYPD spokeswoman, including by the Internal Affairs Bureau.