Favorite TV Show's that have gotten cancelled too soon. 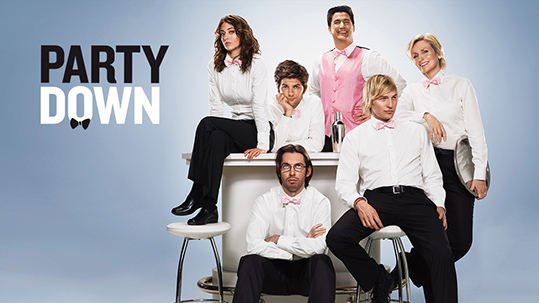 ^^Party Down. Comedy from Starz. Only made one season, but the show was pretty damn funny. Had Adam Scott as the main character. Jane Lynch and Martin Starr also in the show. Starr stole the show as he does with most shows. Funny AF would recommend checking out the one season. Show is about an aspiring actor working w/ a catering company to make ends meet.

Freaks and Geeks! Only lasted one season. Judd Apatow's first show and the first show for a TON of folks who would make a name for themselves later. Seth Rogen, Jason Seagle, Martin Starr, John Francis Daley (mainly does writing, but wrote the upcoming Spiderman Homecoming), James Franco, and others. Show about a family in the 70's or 80's focusing on the 2 children who were in highschool. Show had so much potential, the dad in this show was funny AF.

Firefly. Only lasted one season. I usually am not a fan of Sci Fi, but this show was dope af! I didnt see it until a couple years after it was cancelled, but they had a great thing going on in this show. They made a Movie to tie up any loose ends from season one. While the film was cool, it still left you wanting to see more.

Hello Ladies. Show on HBO that follows Stephen Merchant who is a nerdy guy who runs his own business from his house (something with computers, cant remember exactly what.) and he has a hot female roommate thats an actress. Show follows him and his friends trying to hook up with chicks but he failes miserably. Show was hilarious but got cancelled after one season. HBO did a follow up movie to end the series, but the show could have been great if given some more seasons.

Togetherness. A show by the Duplass brothers. Ran on HBO for 2 seasons. Show is about a couple and their children who work to keep their marriage going but also take in both of their best friends who have fallen down on their luck which adds some chaos into their lives. Show was a Dramedy, but has a ton of laughs in it. Still can be a very serious show though. Was great and ended on a cliffhanger. Hope HBO gives this one a movie to end it right.