Though a release date for her new album remains elusive, St. Vincent is preparing to tour Japan, Europe, and the U.S. later this year. The “Fear The Future” tour comes two years after the indie-rock goddess’ last stint on the road, and the very welcome news was shared via press release and this endearingly quirky announcement video: 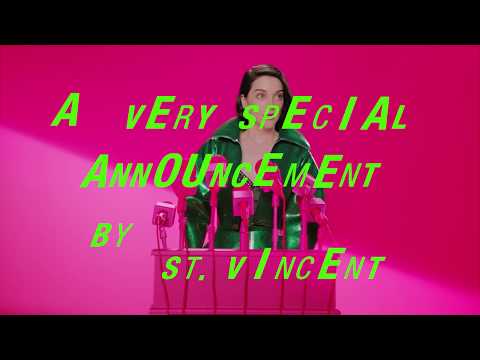 St. Vincent, a.k.a Annie Clark, made her directorial debut earlier this year, in the anthology horror film 🤬 . She also contributed to the 7-inch to benefit Planned Parenthood, but fans are still eager for a full release. But it sounds like it’ll be worth the wait—Clark (sort of) told Fact Magazine that “especially with where we are in the world” the album “[had] to be the best thing that I’ve ever done by leaps and bounds.”

The tour kicks off this August at the Summer Sonic Festival, with a two-month break between gigs. But then the Marry Me artist will hit up London, Dublin, Paris, Detroit, Louisville, Brooklyn, and more. Fan pre-sale begins 6/27, with general sales opening 6/30; for more info, head here.