Ghostdenithegawd Up from da 36 chambersHarlemMembers Posts: 16,231 ✭✭✭✭✭
November 2017 edited November 2017 in The Social Lounge
FILE - in this Nov. 15, 2017, photo, medical doctor Lee Cook-jong describes the parasites found inside the body of a North Korean soldier at Ajou University Medical Center in Suwon, South Korea. Hospital officials say on Saturday, Nov. 18, 2017, the condition of the North Korean soldier severely wounded by gunfire while escaping to South Korea is gradually improving after two surgeries but it's too early to tell whether he makes a recovery.(Kim In-chul/Yonhap via AP, File)
SEOUL, South Korea (AP) — Surgeons treating a North Korean soldier who was severely wounded by gunfire while escaping to South Korea have removed dozens of parasites from his body, including presumed roundworms as long as 27 centimeters (11 inches), hospital officials said. 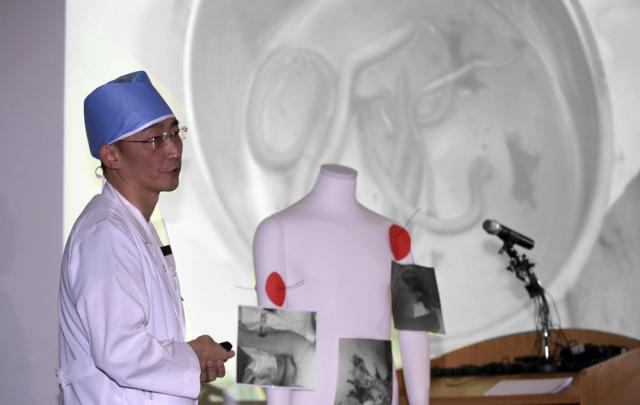 The soldier, whose name and rank have not been disclosed, defected to South Korea last Monday by driving a military jeep near a line that divides the Koreas and then rushing across it under a barrage of bullets. Hospital officials said Saturday that it was too early to tell whether he will make a recovery.

While treating the wounds, surgeons found the large parasites, which may be reflective of poor nutrition and health in North Korea's military, the hospital said. Doctors measured the soldier as being 1.7 meters (5.6 feet) tall, but weighing just 60 kilograms (132 pounds).

"I spent more than 20 years of experience as a surgeon, but I have not found parasites this big in the intestines of South Koreans," Lee Cook-jong, who leads the soldier's medical team, told reporters last week.

Lee is a famous trauma specialist who was hailed as a hero in 2011 after conducting life-saving surgeries on the captain of a South Korean freighter ship who was shot during a rescue mission after being held by Somali pirates.

While the North Korean soldier's vital signs were stabilizing on Saturday, he continued to remain unconscious and relying on a breathing machine. After consecutive surgeries to repair internal 🤬 damage and other injuries, no further surgeries are planned as of yet, said Shin Mi-jeong, an official at the Ajou University Medical Center near Seoul.

South Korea's military said four North Korean soldiers used handguns and AK rifles to fire about 40 rounds at their former comrade, who was hit at least five times. He was found beneath a pile of leaves on the southern side of the Joint Security Area, and South Korean troops crawled there to recover him. A United Nations Command helicopter later transported him to the Ajou hospital.

It remains unclear whether the North Koreans chasing the soldier fired at him even after he crossed into the southern side of the border, which would be a violation of an armistice agreement that ended the 1950-53 Korean War. The U.N. Command, which is investigating the incident, postponed a plan to release video footage of the soldier's escape on Thursday.

The Joint Security Area is jointly overseen by the American-led U.N. Command and by North Korea, with South Korean and North Korean border guards facing each other only meters (feet) apart. It is located inside the 4-kilometer (2 1/2-mile) -wide Demilitarized Zone, which forms the de facto border between the Koreas since the Korean War.

Sooo hold up all that 🤬 about the north koreans being these badass soldiers and this may be the condition of these 🤬 !!!!