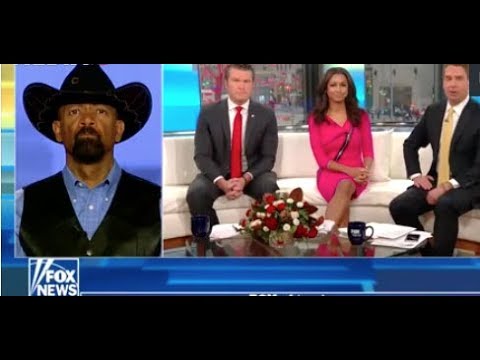 Prior to President Donald Trump’s visit to the opening of the Mississippi Civil Rights Museum today, Fox & Friends brought on Trump supporter and former sheriff David Clarke to discuss the president’s appearance. And things got very tense very fast.

Right off the bat, co-host Pete Hegseth asked Clarke what he thought about Rep. John Lewis (D-GA), a civil rights icon, deciding not to attend the opening because Trump would be in attendance. Clarke reacted by immediately dismissing Lewis.

“John Lewis — he was bloodied on the Selma bridge, Sheriff, when trying to protest voting rights and a variety of other things,” guest host Eboni Williams said in response.

Clarke shot back that he knew who Lewis was and that he had become one of the “most irrelevant members of Congress,” adding that Lewis has been “reduced to being a caricature” before praising Trump for realizing that “actions speak louder than words.”

“Sheriff let me say this to you,” Williams said. “For you to say that nobody cares about John Lewis is inaccurate because I assure you that there are many people across this country that absolutely do care about him.”

She added, “As for your commentary on his political record as a congressman, I’m actually not even addressing that part because this museum opening is about the civil rights of American citizens, so when it comes to his record on that, Sheriff Clarke, I think that it’s pretty undisputed.”

The ex-sheriff replied by saying that most people under the age of 35 don’t know who John Lewis is before bringing up that if it weren’t for Republicans, there’d be no Civil Rights Act because President Lyndon Johnson had to get GOP votes to pass it.

“I appreciate that history lesson but as somebody that holds a degree on the subject I really don’t need you to update me on who was required for Lyndon B. Johnson to pass the Civil Rights Act,” Williams stated.

“Apparently, you’ve forgotten some of your history,” Clarke retorted, leading Williams to smile back and tell him that she doesn’t actually have anything against Republicans. Meanwhile, Hegseth jumped back in to help Clarke out by stating he wouldn’t have even known about the museum if it wasn’t for Trump’s visit today. Of course, Clarke was completely in agreement with that comment.


Faux News viewers are not going happy that their favorite Trump shucker and jiver.. Got checked like that.. Props to Eboni for exposing his foolish coonery…
9 · Share on TwitterShare on Facebook