This entire shooting case is bringing mad tensions to a head... 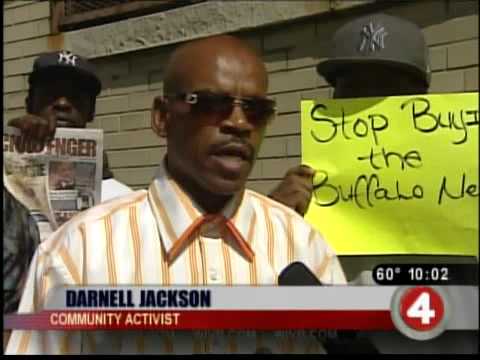 Tricia Cruz
Posted by: Eli George
BUFFALO, N.Y. (WIVB) - It lasted only a few seconds, but a confrontation between Darnell Jackson and a Buffalo Police detective here at News 4 has sparked outrage. Did the detective cross the line with the man who orchestrated the peaceful surrender?

The video shows Buffalo Police detectives trying to take Riccardo McCray into custody at our News 4 studios. Community activist Darnell Jackson tries to stop them, and that's when the "shove" happens.

Jackson says he was trying to get police to wait for McCray's attorney. He argues that McCray was not a danger because he had already surrendered.

Jackson said, "I mean, you reach out to the community to help you, and then we reach out and we try to help, and if he don't like me personally that's his problem, but I wanted to make the community safe by trying to get this guy off the streets."

Bishop Perry Davis from the Stop the Violence Foundation was with Jackson when McCray surrendered.

"I thought it was totally out of line. First off, instead of congratulating Mr. Darnell, they wanna shove him around and treat him like he didn't exist," said Bishop Davis.

Buffalo Police tell News 4 they are extremely grateful for all the work people did in the community to make the arrest happen.

Spokesman Mike DeGeorge said, "But first and foremost, yesterday the department was there to bring an individual into custody who would later be charged with killing four people."

DeGeorge goes on to say that police had to move fast considering McCray had turned himself in to a television station.

"This individual has been charged with killing four people and to have a situation with that environment is certainly quite tenuous," said DeGeorge.

Darnell Jackson says he actually called police before calling us but that no one returned his phone call until hours later. Police Spokesman Mike Degeorge tells News 4 he is not aware of that phone call taking place.
0 · Share on Facebook