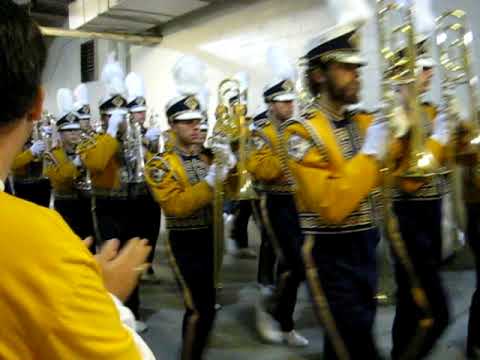 The newest big man on LSU's basketball roster has a far more unusual back story than most of his teammates.
He hasn't played much organized basketball. He's been too busy playing music.
Meet sophomore Andrew Del Piero, by far the most massive member of LSU's marching band the past two years. The 7-foot-2, 286-pound tuba player hasn't been part of an organized basketball team since his freshman year of high school, but he won a walk-on position with LSU after impressing coach Trent Johnson at an open tryout earlier this month.
[Video: More unexpected talent: Laker fan makes half-court shot]
"Andrew is a young man that hasn't played a lot, but we knew of him last year," Johnson told The Daily Reveille. "Anytime you see a guy in the band walking along with that size, you're like 'Oh my goodness.'"
It's surprising that Del Piero hadn't gotten more serious about basketball sooner because the sport is in his blood. His father Paul played collegiately at Dartmouth, yet it wasn't until his friends at LSU started asking him why he didn't play that he first seriously considered trying out.
Del Piero told The Daily Reveille that he worked with former Texas assistant coach Eddie Oran this summer to prepare for the open tryouts. If he improves his conditioning, he's hopeful he can be an asset to the basketball team, whether as a backup big man in games or as a big body on the scout team in practice.
"I need to be able to run up and down the floor and be able to keep up with the smaller guys," he said. "It's hard to tell right now whether they actually have a use for me. But I guess I'll have to wait until I have the time to prove myself."
LSU doesn't have a lot to look forward to in basketball after losing its top two scorers from last season's 11-20 team, so let's hope that Del Piero beats the odds and makes an impact.
Even among walk-ons with feel-good stories, his is better than most.

Well they say 7 footers dont grow on trees but to find one in your band is lucky. Dont think he will play this year unless they have a season like three years ago!
0 · Share on TwitterShare on Facebook