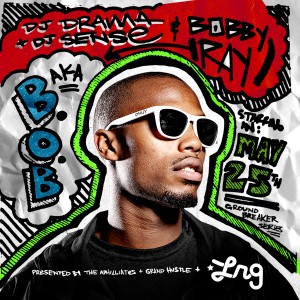 B.o.B. has been fighting to get out of the mid range game for a few years. This latest tape finds him aligned with the Aphiliates and DJ Drama along with Grand Hustle for his newest work under the moniker of alias Bobby Rae for the May 25th Mixtape.

The tape opens to with “The Biz” which finds Bobby Ray going in over the “Shook Ones” instrumental. Never a bad idea, and it finds B.o.B abandoning the playful steez on the final verse. “Champion” finds the artist seemingly triumphant delivering a bouncywell-timed Killer Mike-like flow that masks the lyrical simplicity on this song. Playboy Tre comes through to slow it down on “Bet I” which flaunts the double time flow on the slow 808’s that you’ve come to love from the south. Good song to keep the listener off pace.

“Gladiators” features the young and hungry J. Cole. The slow burn beat suits B.o.B. very well and he flows over it butter over hot biscuits style. Cole is rapidly developing that same rookie gravity that Drake has and his rhymes are flat out dope. What B.o.B. does with flow, Cole does lyrically. This track is followed up by the self produced guitar driven “Out Of Time.” The plunking strings and the sing-song flow go together well and puts B.o.B’s inherent musicality on full display. This edge could be used to create separation from his contemporaries if he honed his craft in this lane. The second verse brings in live drums that cradle his flow and push it closer to the rap side but with good results.

“B is for R.o.B” is a quirky interesting track that on its own stands as solid and creative in construction but in stark contrast to the preceding song. It could have done with a song between the two to buffer the differing feel of both songs. “🤬 The Money” could have used John Legend on the hook but the piano paced vibe is smooth and robust with rhythm. The song deals with getting overwhelmed with the mania attached with the music business. Asher Roth guest stars sounding vocally very close to Eminem, if not in flow and delivery. B.o.B owns the track but Roth doesn’t get drowned out. Well-placed sample dances with the song “Testify” style.