Artist of the Month: CunninLynguists - A Decade of Genius

CunninLynguists, pronounced Cunn-in-lin-guists, a pun based around 🤬 , are a hip hop group from Lexington, Kentucky and ATL, Georgia. The group had two founding members in Kno and Deacon The Villain, who met at a function for the now defunct Blaze Magazine, in Atlanta, GA; but has had three members since 2003, starting with Mr. SOS and ending with Natti, who joined the group upon Mr. SOS' leave in in 2006.

The current three members of the group include Kno - the producer of most of the groups material (other producers such as RJD2, and Domingo have produced for the group in earlier years), with Natti and Deacon The Villain on vocals.

The CunninLynguists have been active since 2000 and released their first album, Will Rap For Food, in 2001. Will Rap For Food was warmly received by critics who were impressed with Kno's production as well as Deacon's raps. The groups debut album led to their deal with Freshchest Records who released Will Rap For Food in 2005 following their 2003 independently released, SouthernUnderground (which was re-released in 2004).
Some of the best tracks from Will Rap For Food:

Their 2003 effort, SouthernUnderground, gained guest appearances from the likes of Masta Ace, on the classic track "Seasons" which looks at Hip Hop from a Common Sense I Used to Love H.E.R. angle, discussing the history of hip hop through the seasons, produced by RJD2. Deacon raps "🤬 Vanilla Ice cones" and goes on to state that "American's mostly wanted that Chronic on the Left Coast"... and finishes with "I wish this summers vibe could have lasted forever, too bad we had to have a change in that weather, that 🤬 was beautiful".
Some of the best tracks from SouthernUnderground: 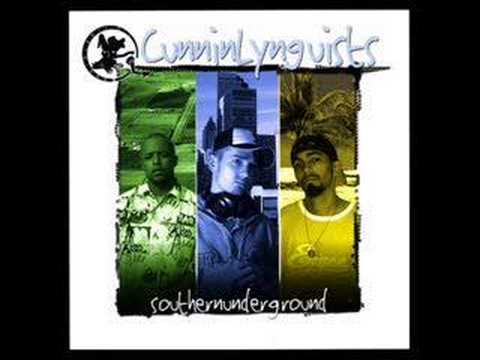 Their place in hip hop history was cemented with the album of 2006, A Piece of Strange. The concept driven masterpiece told the "tale of the pathway to and from sin" and was depicted clearly with the groups album cover:

CunninLynguists third studio album featured Goodie Mob's Cee Lo Green, Immortal Technique and ToneDeff. Kno's production was featured for the full album and eradicated any naysayers that were still around with regards to his production as he experimented further with his samples and sound. Widely regarded as the groups best album, A Piece of Strange was released worldwide and received exceptionally positive reviews with URB stating the album as "A piece of beauty".
Some of the best tracks from "A Piece of Strange":

As a now cemented and widely respected group in 2007, CunninLynguists were joined by industry talents Phonte (of Little Brother/The Foreign Exchange), Devin the Dude and Witchdoctor for their 4th studio album, 🤬 Acres. Again, completely handled by Kno's soulful production, 🤬 Acres featured many stand out tracks, namely the ones listed below:
🤬 Acres:

Upon recent years, CunninLynguists have branched out with their Strange Journey mixtapes and the groups founding members have released their first solo albums. First with Kno's Death Is Silent (2010) and followed with Deacon The Villain's N.W.L (2010) with CunninLynguists collaborator, Sheisty Khrist. Both albums have been listed in many top 10 albums of 2010 lists and showcase the groups individual talents.

2011 looks set to see the long awaited and anticipated release of the groups 5th studio album, Oneirology. Artwork is shown below and will be released in March 2011.

I for one, cannot wait for this release and appreciate the last decade of CunninLynguists legacy, a brilliantly talented group who have amounted many plays in my iPod's and iTunes over the years.
CunninLynguists, The Essence Salutes You.
0 · Share on Facebook