Lol anybody else remembers this? 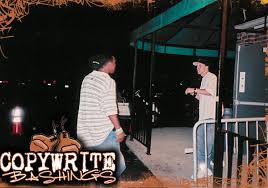 people talk about Joe Budden and Young Berg gettin beat up, but Copywrite has been beated up way more than any of them dudes.
only person Copywrite ever beat up was Cage, and after he became an emo 🤬 :
http://thecryptonline.com/v3/index.php/copywrite-vs-cage-fight-video.html

here's a hilarious interview from iCon about how he beat up Copy (props to MC_Akademix from rapmusic board):

well to make a short story long--here's a blurb from an interview with iCON from gorillamovement.com...this happened in scribble 05 by the way

You have been rather quiet on a topic regarding a little scrap at Scribble Jam with Copywrite and people have been dying to hear your side of the story, so the soap box is now yours to milk this promotional cow. What happened at Scribble Jam between you and Copywrite that ended with Pete Nelson having to pick himself off the ground, is there any history between the beef between you and the MHZ member, some say it is over money and beats, and will the war continue on wax or will you leave it at the one punch knockout that you served him at Scribble???

Aight I’m gonna say this all one time so heads can stop asking me. This Pete thing isn’t some spur of the moment publicity stunt that I came up with to get “internet street credibility,” it has history behind it.

In 2001 I was writing this song called “All Hail” that was going to be produced by JJ Brown (producer for Louis Logic, Awar) and I had some punchline that was a play on the phrase “holier than thou,” which coincidentally is a Copywrite song. All my constituents that I spit the verses for were like “yeah that’s dope, but are you dissing Copywrite?” This was shortly after my altercation with the other bol and I never wanted to be known as an emcee that kept creating conflict with established rappers, so I hit Pete up on AIM. It was peace, we were chopping it up and he was like “yeah I don’t think you’re dissing me” whatever whatever. He was mad cool about it and I had just gotten some money from some battles I had won so I asked him to do the hook for the song. He agreed and requested that I send him the money up front and he’d do it before he left for tour. I thought this was how things worked in indie rap so I just sent him the loot. Obviously he never did it.

Time passed, my name started to garner its buzz and I started networking and getting on more shows and all that. Then I think this was the summer of 2003 when Alaska and them were throwing those “Best Damn Rap Shows” at North Six in Brooklyn right after Pete’s album came out I emailed him like “what’s up with my money, I’m coming to the show.” For the first time in like over a year he replied to my email like “yo dog, I got you just gimme a few weeks.” That night he came late to the show and he left right after he got offstage. Then there were a couple shows where we were both on the bill and he’d cancel. So there was a whole lot of this going on and a whole lot of our mutual friends trying to smooth it over and make it go away. I gave too much of a 🤬 around then and I didn’t want to create anymore problems for myself so I just charged it to the game.

Then I finally saw dude again at a show in Columbus at Bernie’s and I stopped caring. I was with Dos Noun, this kid Tymez and some other heads from Pittsburgh. Dos and Tymez were like wait til after we perform to approach him. So I did. When it was my turn to rock I just started freestyling and was like “🤬 Copywrite.” By then I guess he had left. I didn’t know because I had seen him walk in and out a bunch of times that night. So his boys approached Tymez like “yo we got pistols” and all this. This one white bol was like “how you gonna diss my man when he ain’t here?” I was just like “call him and tell him to come back then.” We stayed for about a half an hour. Nothing happened. We left.

This all brings us to Scribble Jam. I had seen dude walking around with his stuff early in the day but I knew if I started a fight I’d get kicked out and I was supposed to be hosting the prelim battle (which is a good way to get people to put the name with the face). So I waited and while I was hosting this kid (Moodswangz I think his name is) said “you’re getting your ass beat like Copywrite in that lobby fight.” After he was done I was like “YOOO!! DID YOU HEAR THAT LINE?!” and I repeated it and I was like “Anybody who says a line about Copywrite got my vote. 🤬 that dude.”

Afterwards Pete walks up on me like “Yo, you wanna take this outside?” Mannnnn let me tell you I felt like it was my damn birthday!!!! I replied “I sure do! I’m gonna go put my stuff down, I advise you to do the same and I will be right back.” So I went and put my box of merch down by the Ground Opening booth and I said to my man Rob Viktum “yo this dude Copywrite really think he want it with me!” and I ran back over to Pete and the two of us started walking outside. I kept looking back because I ain’t know how many heads he had with him… after all we were in his home state. He saw me doing this and he was like “who you waiting for dog?” That’s when I realized he knew he was in over his head.

Funny sidebar though…some random dude had been following us out the door and Copy was like “who is this -- your backup?!” and I was like “Man I don’t know this muhfucka.” Then I asked the cat “yo do I know you?” and he was like “yeah we met at such and such a show.” How come I can’t find a fan when I wanna sell a cd? Haha.
0 · Share on TwitterShare on Facebook