Altogether now: “You haff sunk my battleship!” No, it’s not the trailer for a new Bill and Ted outing (though that’s still on the way if Keanu and co are to be believed), it’s the first promo for Peter Berg’s adaptation of the classic board game Battleship. You can have it ping your web radar below. 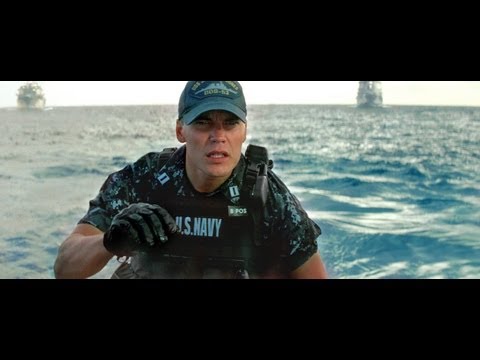 Taylor Kitsch – who, with his military scrub haircut looks disturbingly like a slightly less muscular Channing Tatum – stars as Hopper, a naval officer on the USS John Paul Jones. He’s been a rising star of the navy, but he’s suddenly not quite so favoured. Part of it has to do with him dating (and looking to marry) the daughter of Liam Neeson’s Admiral Shane.

Still, there are bigger things to worry about – on a routine set of exercises, the ship’s crew encounters a mystery object floating in the ocean. Hopper is dispatched to investigate and makes the fatal sci-fi movie mistake of touching the thing. Cue a signal racing off into the stars and the surfacing of some decidedly warlike alien craft that proceed to attack the fleet.

From the looks of this, Battleship will be big, silly, full of explosions and lots of people shouting. Which could be A Good Thing given that it’s really not trying to be anything more than that…

With Alexander Skarsgard, Brooklyn Decker and Rihanna also in the cast, the film will dock at our cinemas on April 20 next year.