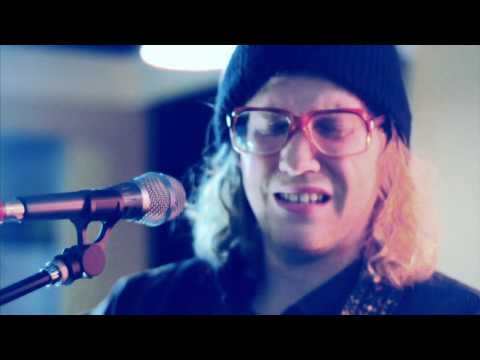 .....I didn’t even know who Allen Stone was up until about 15 minutes ago, but I can definitely tell you this song is probably the best thing I’ve heard all day. He’s got an incredible voice, and we’re absolutely intrigued to see what he’s got coming up for his self-titled album. This is fire, on that R&B Soul tip.

If he sticks to this formula, he’s gonna have a good career.....


Allen Stone may look like a hippy Chewelah, WA, but he sounds like Stevie Wonder and Prince had a child. He blew the audience away during BMI’s “Snowball” at Sundance and got a standing ovation for an otherwise reserved crowd. His new self-titled release is due out this spring. He sat down with The Comet for a Q&A.

Q: This new album is your follow-up to 2009’s “Last to Speak.” What did you learn the last couple of years? And how did you approach the record process on this one?

A: Well, this one was kinda weird because we recorded it just a little under a year after “Last to Speak” and typically you don’t go into production on another record that soon after you release one. But the opportunity presented itself. I was given a chance to record with Raphael Saadiq’s rhythm section and so it was kind of like well, yeah I’d be an idiot to pass up an opportunity like that. That sparked the writing portion of the record. I think we recorded 17 songs, and the record has 12. It was thrown together quick but it was definitely a learning experience. I would say that what I learned from the progression of “Last to Speak” to this new record is I think that I’ve tried to find my sound a little better and have been able to capture that more.I don’t think I’m fully there yet, but I’m definitely making strides towards the right direction.

Q: You were working with Andy Grammer and Matt Wertz. How did that come about?

A:My manager used to do some tour management for Matt. I was in Nashville for a week and we got a hold of Matt and he was just totally down to get together and try to write a song. It actually went really quick. I think we wrote the song in about an hour. He’s a brilliant person and a beautiful spirit, so that was really cool. Same kind of thing with Andy Grammer, his manager is good friends with my manager so they set that up for us to get together. I met Andy at SXSW last year and got a chance to spend some time with him, get to know him a little bit. That kind of brought us together. Andy Grammer is another one of those just amazing, talented people. He is, in my opinion, about to blow up.

Q: How did the first single, “Another Break Up Song,” come about? Were you just tired of all those break up songs on the radio?

A: Yeah, that was a big portion of it. It was also stemmed from relationship issues that I’ve had in my life and I tend to blow them out of proportion. I think a lot of people tend to blow things out of proportion. A lot of the times, especially nowadays, people are just way too selfish in relationships. There’s just so much heartbreak and agony involved with relationships. It was kind of my test towards sucking it up and loving each other and getting through stuff and having a little bit more patience than I think a lot of people do.

Q: You got your musical start singing at your father’s church, do you recall the exact moment when you decided this was something you wanted to pursue professionally?

A: I’ve always really loved performing, I was always singing at church. I started leading worship at church when I was 14. I’ve always really loved being in front of people and expressing myself. But I think probably what put a spark in my mind at an early age was a close family friend that had a run in the music industry. She started when she was like fourteen and then she got signed to a Christian label and had quite significant success in the Christian industry and then crossed over to secular and had a couple of pretty big albums and did pretty well. I remember driving in the car with my dad and we didn’t really know that she sang. Our families kind of lost contact over the years, and one of her songs came on the radio and I was blown away, it was like wow, she’s traveling the world and singing and connecting with people just through lyrics and song. I think that was the kick-start, maybe I could write enough songs for these people to pay attention and maybe I could actually do it for more than a hobby.

Q: You live in Seattle now. What was it like growing up in Washington state?

A: I grew up in Chewelah, Washington. It’s about forty miles outside of Spokane. It’s really out in the middle of nowhere. It’s like a ski-🤬 town. I’m pretty sure the main reason why it even exists is because it’s right at the bottom of a ski hill. It’s pretty well attended throughout the winter. It’s really small, there’s about 1500 people who live there now. I was born and raised in Chewelah and then graduated and moved to Seattle when I was 19. I’ve just been there, trying to do it independently for the last four years now. It’s been a grind.

Q: The soul greats are a major influence for you, is that the type of music you primarily grew up listening to?

A: No, not too much. My dad, being a pastor, I was pretty sheltered from any music that wasn’t blatantly Christian, so not so much rock and roll. I grew up listening to like Steven Curtis Chapman, all these Christian bands, and then I think when I was about 14 I really got into Dave Matthews and then I discovered Stevie Wonder. I always grew up singing Gospel music and singing soul tunes in church, but it wasn’t until I heard Stevie, Marvin Gaye, and Solomon Burke, and all these old soul records that I found where the passion was.

Q: What was the first live show you did?

A: I was living in Spokane actually, I just moved from Chewelah for the first half of the year after I graduated. I was playing every Saturday night at this burrito restaurant and that was where it all started. I play piano too, so I’d bring in my keyboard and just set up a mic and play through the PA. I did that every Saturday for a couple of months. I was basically background music and I got accustomed to playing sets where people aren’t paying attention. I’ve definitely played a lot of those in the last four years of my life. I’ve played a lot of colleges, toured around trying to cultivate a new market. You have to start at the ground level when you’re an independent artist. I go into towns that I’ve never played before and tough it out and get lost in the music and not pay attention to the fact that nobody is listening.

Q: Do you have any musical guilty pleasures?

A: Probably the only guilty pleasure I have is I like Boy George a lot. I’m the kind of person where I’m not ashamed of any portion of my life. I really enjoy Boy George, ‘N Sync, Backstreet Boys, that kind of stuff. I enjoy that music. I don’t feel guilty about it in any way.

Q: Are you going to SXSW? Festivals? What’s coming up next?

A:: I play SXSW in March. Right now, I’m just trying to get on the road as much as possible. My passion is performing live so I really want to cultivate that following and share the live experience with people.
1 · Share on TwitterShare on Facebook