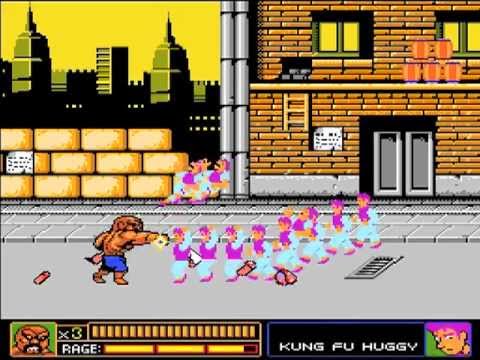 Abobo's Big Adventure is a parody game which pays tribute to the 8-bit glory days of the Nintendo Entertainment System (NES).

The development of the game began way back in 2002 when Roger Barr set out to have Abobo fight his way through a variety of classic NES games in search of his lost son, Aboboy. Roger teamed up with a programmer who went by the name "Bane" at the time and they started putting the first levels together. Unfortunately, the Abobo game kept getting sidetracked due to each of them working on other game projects at the same time (including Domo-Kun's Angry Smashfest).

The Abobo project stayed on the backburner for years, but Roger always hoped to return to it eventually. He was lucky enough to meet Nick and Luis who both shared a love for classic 8-bit games and stuffing games full of ridiculous humor. After working on some other games like "Trick or Treat Adventure Quest" together, the three of them started to recreate the original Abobo game from scratch in 2006. Nick worked up a whole new game system, Pox recreated the existing graphics and Roger developed a big story for Abobo to really dive into... fists first. It was a daunting project, but like all labors of love, it's something that simply had to be done.

The trio have been working on this game for ages with one simple goal: make Abobo's Big Adventure the *ultimate* tribute to the Nintendo Entertainment System. This is the game that any kid who grew up on the NES always dreamed of playing and it goes beyond anything the system ever could've been capable of.

For those of you wondering if the game will be for sale, the answer is NO. Abobo's Big Adventure is simply a labor of love and will be available to play for free on the web. The game really pushes the limits of what Flash is capable of and you will soon have control of the most unappreciated, brutal, rage-fueled character in the entire pixelated universe in your hands.