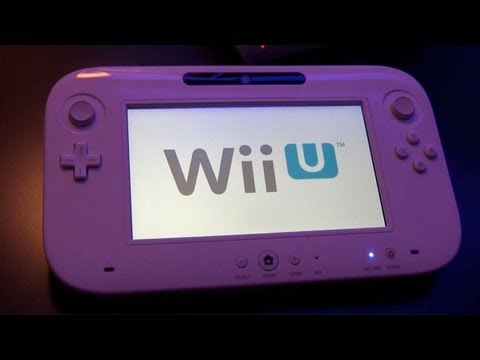 CES: A First-Timer's Impression of the Wii U

For the first time since E3, we were able to get some quality time with the Wii U, and in a much more intimate setting. This was my first opportunity to see Nintendo's upcoming console in person and while I didn't know what to expect coming in, I left the demonstration excited about the company's future.

Despite its size, the Wii U controller is light and easy to hold, and it was instantly apparent why Nintendo would stress this feature as opposed to putting a ton of emphasis on something like its HD capabilities. It was easy to use, and my mind quickly began thinking of different ways that it can be utilized to enhance gameplay.

After a quick briefing, five of us grouped up to play Chase Mii, a hide-and-seek game that gives a good example of how the Wii U's unique controller can be used for intuitive gameplay. In this instance, the screen on the Wii U controller is used to give the "hider" an entirely different perspective of the game than the "seekers" who had to rely on the shared television screen.

Shortly thereafter, we went through a couple rounds of the Metroid-themed Battle Mii. The premise is somewhat similar to Catch Mii, except that instead of trying to find someone hiding, each of the Wii Remote players team up to shoot down the player using the Wii U remote. The fifth player uses the new controller's motion control capabilities and video screen to maneuver and navigate a flying ship.

Overall, controlling the vehicle was difficult, but it felt like I would just need more time with the console to re-learn how to play video games when using this type of input system.

Taking a look at what The Legend of Zelda would be like in high definition was amazing. The real-time video uses the same art style as Twilight Princess, which did nothing but increase the level of awe when witnessing Link in beautiful 1080p. Flipping between night and day versions of the video allowed me to see the new type of lighting effects that the Wii U can handle.

This demo included the ability to swap the gameplay video from the television to the Wii U controller; a process that is instant and showed how well the 6.2-inch display performs.

Panorama View extended the demonstration on how the new controller's screen, gyroscope and accelerometer could be used in a game. In this Google Street View-esque demo, I was cruising along the streets of Japan. The television displayed a static point-of-view, while the Wii U controller was used to check out the environment from different angles. The motion detection capabilities allowed me to turn around 360 degrees, and any angle up or down, with the display showing me exactly what I would see if I were really there.

Just as it was with the Wii and the DS, Nintendo has given developers a myriad of new ways to let players interact with video games. The difference with the Wii U is that there are even more options. A whole new dimension has been added to multiplayer games, and HUDs and menus can be cleaned up with the help of the additional screen.

Unfortunately, we still don't know when the console will be released or how much it will cost, but even as someone who has spent a considerable amount of time away from their Wii, Nintendo's next console has me eagerly anticipating what the company has up its sleeve.