A Link Between Worlds 3DS Bundle 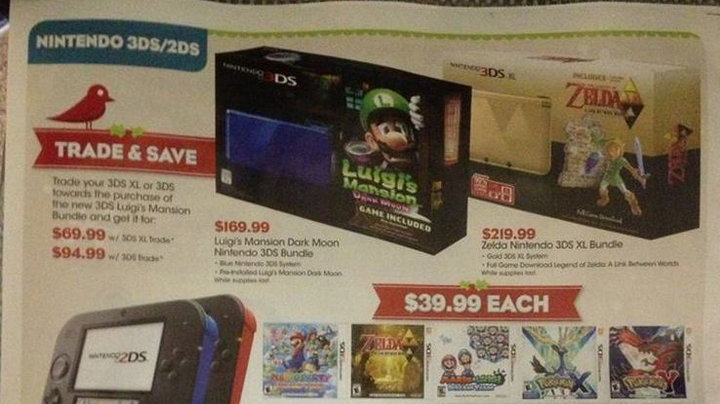 SHARE
The Nintendo 3DS bundle featuring a Zelda-themed 3DS XL and a copy of The Legend of Zelda: A Link Between Worlds may be on its way to the U.S., if a leaked Black Friday ad for GameStop is anything to go by.

As seen on BFAds.net, the purported GameStop circular includes a listing for the bundle, which Nintendo has thus far announced only for Europe. The company will launch the bundle alongside A Link Between Worlds on Nov. 22 for £199.99 in the U.K.; according to the Black Friday ad, it will cost $219.99 in America.

We've reached out to GameStop and Nintendo for more details, and will update this article with any information we receive.

Update: GameStop representatives confirmed to Polygon over the phone that the leaked ad is legitimate, and that the company is investigating how the leak happened, but could not comment on specific items listed in it.
0 · Share on Facebook