Dozens of Mummies Unearthed at Egypt's Valley of the Kings.

Darth Sidious ..in the grim darkness of the far future, there is only warMembers Posts: 2,507 ✭✭✭✭✭
April 2014 edited April 2014 in The Social Lounge
Archaeologists have discovered the final resting place of at least 50 royal Egyptians — including princes, princesses and infants — while excavating a trashed tomb at the Valley of the Kings.

Hieratic inscriptions (a cursive form of hieroglyphs) revealed that most of the mummies in the tomb were related to two pharaohs, Thutmose IV and Amenhotep III, who ruled during the 14th century B.C. The dead included at least eight previously unknown royal daughters, four princes and some children, the archaeologists said.

One of those newly studied tombs is KV 40. From the surface, the only hint of a burial chamber was a depression in the ground. Excavations revealed a 16-foot-deep (5 meters) shaft, a corridor and four rooms in shambles. The 3,300-year-old tomb was likely plundered for its gold and wood during antiquity, and later looted for any other valuable goods that could be sold. The archaeologists, who have been excavating in the region since 2009, found textiles, mummy bandages, linen cloths, bones and other scattered funerary artifacts in the tomb. These objects were covered with soot from a heavy fire, presumably set by grave robbers of the late 19th century.

The adult mummies in KV 40 are largely fragmentary, likely torn apart by grave robbers, but infant corpses in the underground burial chamber remain intact, said researcher Susanne Bickel, of the University of Basel in Switzerland. And while most infants who died would have been buried in a simple fashion at the time, royal children buried in KV 40 seem to have been given a proper mummification, Bickel added.

"They are wrapped in numerous layers of bandages and treated with bitumen," a sticky embalming substance, Bickel told Live Science in an email.

For now, the archaeologists have not determined a cause of death for these infants; anthropological investigations are planned for the next dig season, Bickel said.

"What is certain is that they did not die at the same time (no epidemic), but over a certain time span," Bickel said.

Bits of coffins made from wood and a plastered material known as cartonnage indicate that tomb KV 40 was used again as a burial ground in the ninth century B.C., for members of priestly families during Egypt's Third Intermediate Period.

Studying the newfound mummies and their scattered grave goods could shed light on the lives of people in the pharaohs' royal court, Bickel and her colleagues said. 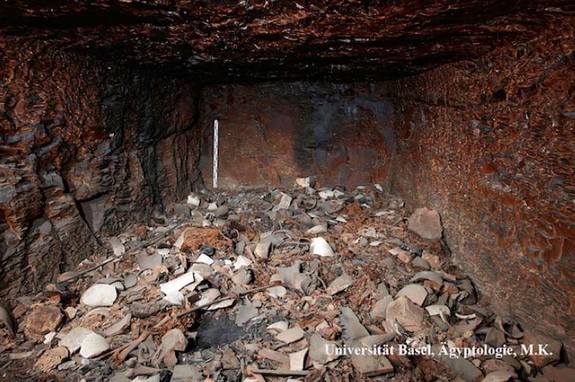