Spike Lee, the Oscar-nominated filmmaker — and well-known New York Knicks fan — has a role developing NBA 2K16's career mode, according to a source close to the game and leaked marketing materials obtained by Polygon.

"Be the story," says the cover of NBA 2K16, whose three different stars — Stephen Curry of Golden State, James Harden of Houston and Kevin Durant of Oklahoma City — will tell social media followers they're "starring [in] the new Spike Lee Joint!" 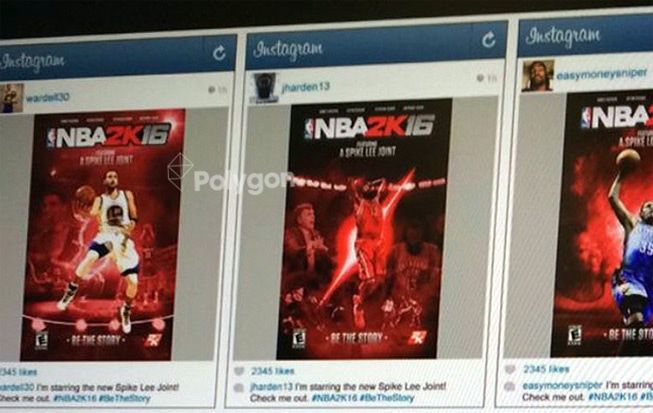 Lee also is credited on the game's cover, much in the same way Jay-Z was three years ago as a celebrity executive producer for NBA 2K13.

Polygon confirmed the authenticity of the above image through a source with knowledge of the game, and described its contents to a 2K Sports representative, who declined to comment.

Lee's involvement has been rumored over the past month. In mid-March, the New York Post mentioned he was "in San Francisco working on an NBA video-game project," and had attended a Knicks shootaround at the University of San Francisco. 2K Games and Visual Concepts, its in-house sports studio, is located in Novato, a suburb north of the city. Shortly after, a sideline reporter in a Knicks broadcast also said Lee was involved in the game.

Lee's association with pro basketball is well known and a major part of his public persona. He wrote and directed 1998's acclaimed He Got Game, a basketball film starring Ray Allen, with cameos by numerous NBA stars and league figures. From his courtside seat at Madison Square Garden, Lee figured prominently in the Knicks' memorable mid-1990s rivalry with Reggie Miller and the Indiana Pacers. His Mars Blackmon character, originally from the 1986 film She's Gotta Have It, is perhaps more well known for pestering Michael Jordan in a series of 1980s and 1990s ads for Nike.

As for the cover stars, 2K Sports did separate covers in 2011 with Jordan, Magic Johnson and Larry Bird, and put three stars — Blake Griffin, Derrick Rose and Durant — on the cover of NBA 2K13. Durant's appearance would be his third for the series, remarkable but not unprecedented for 2K Sports. Harden cut promotional videos for NBA 2K15 last year. Curry has had no formal involvement with the game.

2K Sports' flagship series has evolved into a pop-culture phenomenon over the past five years, highlighted by Jordan's close involvement in NBA 2K11 and 2K12, and Jay-Z's stint with 2K13. Better known for curating the game's soundtrack, Jay-Z also worked behind the scenes to convince hall-of-famer Charles Barkley to join the game, which ultimately reunited the entire 1992 U.S. Olympic "Dream Team" in video game form.

NBA 2K16 has yet to be given a release date but it typically launches on the first Tuesday of October. Versions are expected for PlayStation 3, PlayStation 4, Xbox 360, Xbox One and Windows PC.