Sh-t Is About To Hit The Fan; Greece Bailout Program to Expire Tuesday 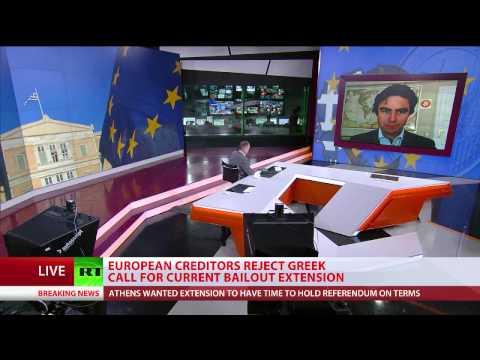 People wait outside a closed branch of Piraeus Bank in Athens, Greece June 27, 2015. The specific branch opens at 10:30 AM local time on Saturdays but it remained closed while dozens of people lined outside to withdrew cash.

Talks fell apart between the Greek government and its creditors, and European officials said Athens' bailout program will expire on Tuesday.

Euro zone finance ministers met to try and thrash out a reforms-for-rescue deal for Greece after the country's prime minister threw a curveball of a referendum on the deal late Friday night. During Saturday's meeting, the finance ministers rejected Greece's request for a one-month bailout extension.

Greece is due to pay the International Monetary Fund 1.5 billion euros Monday and without a deal this weekend risks missing that payment.

Eurozone finance ministers have rejected Greece's request for a one-month bailout extension, according to a European diplomatic source.

On Friday, the Greek government threw out a bailout proposal from its international creditors, putting the country's future in the euro on the line.
After weeks of talks, Prime Minister Alexis Tsipras said he could not accept the terms being offered by Europe and the International Monetary Fund. He said he would recommend that Greeks vote against them in a referendum on July 5.

That brought an abrupt end a series of discussions aimed at finding a way for the creditors to release the remaining 7.2 billion euros of Greece's huge bailout, in return for budget savings and economic reforms.

But the current agreement expires on Tuesday, which almost certainly means Greece won't make a 1.5 billion payment due to the IMF on Tuesday. It would then become the first developed economy to default on the IMF.

Unless Europe blinks in the coming days, the gambit almost certainly means Greece won't make a 1.5 billion payment due to the IMF on Tuesday. It would then become the first developed economy to default on the IMF.

The prospect of a default may force the European Central Bank to curtail the emergency funding that has been keeping Greek banks afloat while account holders withdrew tens of billions of euros.

The ECB was reported to be planning to an emergency call Sunday to discuss funding for Greek banks. The outcome of that meeting could determine whether Greece will have to limit cash withdrawals starting on Monday.

Twitter users in Athens were already reporting signs of lengthening queues outside ATMs in the early hours of Saturday morning.

Every ATM I drove by has lineups and they are growing. pic.twitter.com/D23N5a3moR
— Sakis Michalarakos (@SakisMicha) June 26, 2015

Left-wing leader Tsipras was elected earlier this year on a promise to end austerity. But Europe and the IMF have largely stuck to their guns, arguing that Greece needs to generate surpluses so it can service its enormous debts.

European governments are caught between trying to find a way to help Greece recover from five years of crisis, and concerns among their own voters about throwing good money after bad.

Tsipras said the demand by the bailout lenders for more labor market reform, cuts to pensions and public sector wages, and increases in taxes on food, restaurants and tourism amounted to an attempt to humiliate "the entire Greek people."
"These proposals mainly highlight the insistence of the IMF on harsh and punitive austerity," Tsipras said on Greek TV.

The Greek government has been negotiating with its creditors over the terms of the bailout agreement for four months.

While Tsipras disapproves of the new bailout plan, he said he would respect the way the public votes on July 5.

But by then it may be too late. The existing bailout agreement expires on Tuesday, and it's almost impossible to imagine Europe agreeing to extend given the Greek government's resolute opposition to its proposals.